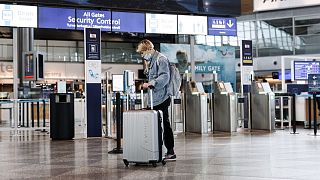 A passenger at Helsinki Airport. Finland's introduction of extra travel restrictions on 28 December did little to stem the spread of Omicron, new research shows.   -   Copyright  AFP
By Lottie Limb  •  Updated: 02/02/2022

Travel restrictions in the EU had little or no impact on the spread of Omicron, according to new research.

Looking at the impact of pre-departure tests imposed by Italy and Finland in December, the researchers found no discernible difference in the spread of the COVID-19 variant.

As of yesterday (1 February) EU countries have been told to base their entry rules on tourists’ vaccination status rather than the COVID situation in the country they departed from.

The two aviation bodies claim the analysis, carried out by Oxera and Edge Health, backs up this person-centred approach, and are calling for all member states to adopt it.

Even if the tighter restrictions had been imposed the day that Omicron was identified as a variant of concern, the research suggests they would not have stopped its spread.

The crux of the issue is that variants circulate widely before being identified - which is why WHO also cautioned against hasty travel bans.

It’s the classic case of closing the stable door after the horse has bolted.

ACI Europe director general Olivier Jankovec also emphasised the burden of restrictions. “Travel restrictions do have a significant effect,” he says, “but it’s not on public health, it’s on economic stability and livelihoods.

“In short: they are doing more harm than good.”

What is the EU’s new approach to travel restrictions?

In showing that continuing pre-departure testing for vaccinated and recovered travellers will have no impact on the future spread of Omicron, the new research backs up the EU Council’s person-centric approach.

Adopting the recommendation last week, the Council said it aimed to simplify the rules for travellers. Commissioner for health Stella Kyriakides said it “puts the EU Digital COVID Certificate at the heart and centre of our coordinated approach,” and urged countries to implement the rules immediately.

It comes as WHO says that the continent may be able to end its COVID emergency phase in 2022 as Omicron has not been as severe as feared.

What changes do IATA and ACI Europe want?

IATA and ACI Europe want all countries to align with the new EU framework, calling on the governments of Austria, Cyprus, the Czech Republic, Lithuania and Malta to drop their extra restrictions immediately.

And while Finland has lifted restrictions for all incoming vaccinated and recovered travellers, Italy has done so only for incoming travellers from within the EU - something the aviation bodies say needs to change now.

“The new regime for intra-EU/EEA travel is right to focus on a ‘person-based approach’ and to recognise that both vaccinated and recovered travellers should not be subjected to any restriction,” adds Jankovec.

“But having common EU regimes has so far not prevented states from going their own way. This must stop.