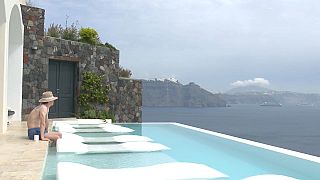 The last two years have been very difficult for the tourism industry, and now with the war in Ukraine and the cost of living crisis increasing pressures, conditions are still far from ideal.

However, resorts across the Mediterranean region are preparing for what they hope will be a bumper season. Among them is the Greek island of Santorini, which at its peak can host around 50,000 visitors at a time in its 400 plus hotels.

Weddings and cruises - Is tourism bouncing back in Santorini?

To Markos Chaidemenos, a hotel owner, the 2022 season has already started well, even exceeding expectations.

In the early days of the war in Ukraine, quite a few reservations were cancelled. Yet now, and it makes me sad to admit it, tourists seem to have forgotten the war.

"In the early days of the war in Ukraine, quite a few reservations were cancelled. Yet now, and it makes me sad to admit it, tourists seem to have forgotten the war. As for our island, we have never had many Russian or Ukrainian tourists."

As well as being popular among Greeks, Santorini has many American, British and French tourists. Cruise ships are also back in force too, and the island is looking to new markets to boost its visitor numbers.

Local business owners are starting to see an increasing number of visitors from China and Japan, often with marriage in mind. This is the case for Zhourun Ge, a Japanese tourist, who after his first visit, decided Santorini was the perfect location for his impending nuptials.

The key to the island's economy

Tourism is the island's only meaningful industry. But the sector is not just important to corporate hospitality chains and luxury hotels. There are still many families on Santorini living off the sector.

Christos Markozanis is the owner of a tavern, which he runs with the help of his two sons, niece and wife. He says the season has started well, but he's still worried about the effects of the soaring cost of living.

Now there's the high cost of energy, I hope that measures will be taken by the government and by the European Union." He fears that if electricity bills remain high, many small businesses will close.

Despite international and national hardships, Greek tourism is preparing for another very good season as the sun, sea and ancient history continue to attract foreign visitors.

Discover more about Santorini's tourism sector in the video above.