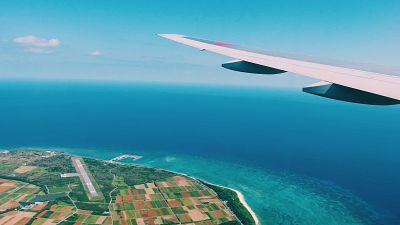 In the age of start-ups, ever more fledgling companies are offering unlimited vacation time in a bid to be seen as progressive. However, critics say such policies actually chain employees to their desks as they feel guilty for taking time off.

But planet welfare appears to be trumping personal wellbeing in a list of workers’ concerns. With more than half of millennials claiming they’d be willing to take a pay cut for a more environmentally-friendly job, conscious employers are trying to make it easier for staff to live out their green travel fantasies.

Currently making up around 2% of global CO2 emissions, air travel’s contribution could hit 22% by 2050, according to campaign group Transport & Environment.

“Until now, however much people cared about the environment, flying was a carbon-heavy luxury they avoided talking about,” says Anna Guyer, CEO of Greenhouse PR. Her company has launched a Climate Perks Scheme, which offers employees extra paid travel should they choose to travel via land or air.

“They’ll take a reusable coffee cup, yet won’t consider the sleeper train. But things are changing. We offer extra holiday days to accommodate slower low-carbon public transport options,” adds Guyer. “So many businesses say they care about the climate emergency, but they aren’t treating it as one.”

In a bid lead the way, the agency is offering its employees an extra holiday if they go flight-free, citing the fact one transatlantic flight generates more CO2 than eating meat or driving a car for a year.

Crafty employees might try to get around the rules by heading off on a cruise. However, mega cruises attract more than 20 million passengers a year, but the boats have been savaged for their promotion of overindulgence while ignoring their impact on the environment. Running on diesel engines bigger than some apartment buildings, they emit a host of greenhouse gases

Friends of the Earth’s latest Cruise Ship Report Card graded every major cruise line with the exception of Disney an F for transparency in their sustainability efforts. Only two cruise lines scored above a D overall.

Greenhouse is not the only one incentivising employees to make a different choice. One London-based climbing centre is offering its workers additional paid holiday days if they choose Earth-friendly and low carbon transport methods.

“It is difficult to resist booking a cheap flight for a week climbing somewhere like France or Spain, when the alternative - car or train - is far more expensive and much longer,” says Georgina Lawrence, marketing manager for Castle Climbing.

“We try to make it more attractive by allowing staff who qualify for the Eco-Day scheme to take extra paid holiday to get to their destination. Many of our staff have rediscovered the pleasures of long-distance train travel and learned how to get creative when planning their holidays.”

But are those extra holiday days enough to allow workers to have the kind of holidays they’ve become accustomed to, while preserving the planet’s resources? Is it possible to get that hit of summer sun without sacrificing your eco principles?

The options when you can’t fly (or cruise)

We went on a hunt to find out if it’s possible to get to bucket list destinations without using planes.

Factoring in the quick turnaround many city break seekers now expect, all the destinations are surprisingly quick and faff-free to reach by train alone. Each is under 24 hours from London St Pancras Station, getting you onto mainland Europe for your onward journey in just a couple of hours.

Culture and history hub Rome can be reached in 13hrs, 54mins. With potential to do the journey overnight, you could walk out of the station and head straight to the city’s many landmarks and pizzerias, potentially saving on a night’s bed and board.

Meanwhile it takes 14hrs, 45mins to reach Copenhagen, the gateway to Scandinavia and growing tourist destination. Nightlife and history buff hotspot Budapest is 17hrs, 24mins away by train, allowing plenty of time to take in the changing landscape as you whiz through it. Heading further south, the sights and sounds of Portuguese capital Lisbon in 23hrs, 25mins.

Though the added luggage of a ski trip means flights might be the convenient option, some of Europe’s most environmentally-conscious winter sports destinations are accessible by land-based transport.

The town of Anzere, Switzerland dumped fossil fuels as a source of power years ago and operates a car-free village centre. It’s accessible from the UK in just over 10 hours via train and bus.

Or head to Kaprun, Austria in less than 16 hours by train. The region sources its energy and water from a hydraulic power plant and pumping station, also relying on solar panels.

Getting to the very tip of southern Italy could take less than 24 hours by train. Or, as a family holiday with plenty of stops on route, the total drive to Reggio Calabria in the toe of Italy’s boot shape is around 21 hours with plenty of options to head on to Sicily.

In need of some history with your sun? Athens could be the one for you. It’s just two buses away (albeit at a gruelling total of 53 hours on the road) or a mixture of trains and buses for an express 35-hour journey.

Growing in popularity, Split, Croatia, has become a never centre for the country’s tourism industry. Mixing whitewashed buildings with terracotta roofs and white sandy beaches meeting blue waters, the city has plenty to offer while retaining its unique character.

If it’s an eastern adventure you’ve set your sights on, you’ll be pleased to know you can get as far as Asia, even to China and Vietnam by train.

But you’ll really need those extra holiday days as a trip to Beijing by rail could take up to a week in itself. Perhaps only one for the most dedicated rail enthusiasts. From the UK, it would be a zippy two-hour trip to Paris on the Eurostar, followed by a 38-hour train to Moscow and a gruelling six-day trip from Moscow to Beijing. From there, it’s relatively easy to travel around East Asia by train or ferry.

Closer to home, it’s possible to head down to Gibraltar by train in less than 22 hours. After a stop to see the monkeys, it’s short ferry-ride over to Morocco and a portal into the Sahara Desert.

One mainly for the kids, a trip to visit Father Christmas in Lapland could roll around come Christmastime. However, it’s far from an easy trip. A minimum of 32 hours by car, it’s a trip that would require plenty of stops en route to keep young passengers entertained.

A trip could potentially pass through France, Belgium, the Netherlands, Germany, Denmark and Sweden before arriving in Lapland, Finland.

Will Leonardo DiCaprio open his new eco-resort in Belize in 2020?