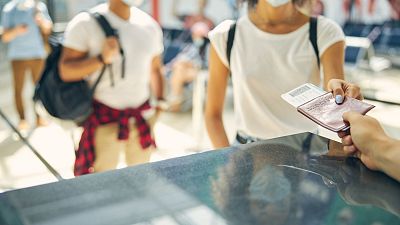 Millions of Brits’ summer holidays are at risk because of an ongoing backlog at HM Passport Office.

It had an average turnaround time of three weeks pre-pandemic, but the government agency is currently advising customers to allow up to 10 weeks for applications to be processed.

Even so, the 10-week target is being “repeatedly breached”, MPs told the House of Commons yesterday (25 April). Some travellers say they have lost hundreds of pounds because their new passports have failed to arrive before the date of departure.

“All our constituents are having to cancel holidays, miss funerals, rearrange visits, with even a 10-week target routinely being failed,” said Stuart McDonald, Home Affairs spokesperson for the SNP.

“What will be done to avoid this predictable mess getting worse?” he asked, “And can we be assured that the 10 week target will not be lengthened further as we approach the summer?”

Simon Hoare, Conservative MP for North Dorset, described a more inconsistent picture in the south of England. “My constituents are telling me their experience is either really very good or it is an absolute shambles,” he said.

Customers are also reporting breakdowns in communication when enquiring about the issue, so here’s what we know so far.

Why is the Passport Office struggling?

The Passport Office says that its demand is “at an all time high”, with COVID-19 restrictions having recently been lifted in the UK and many EU countries boosting tourism.

There were one million passport applications last month, the Commons heard, compared to the usual seven million a year that the Passport Office processes. With travel options limited during the pandemic, some five million people delayed renewing their passport.

Confusion over post-Brexit travel rules is also causing a surge in applications. Since leaving the EU, British adult passports are now only valid up to 10 years from the date of issue. Holidaymakers also have to factor in that passports must be more than three months from the date of expiry when they travel to the continent.

As a result of the influx, Director General of HM Passport Office, Abi Tierney, said, “Our dedicated staff are working tirelessly to ensure that passport applications are processed as quickly as possible.”

But some MPs downplayed the suggestion that delays are entirely caused by the surge in post-lockdown travel.

TNT, the UK government’s official courier, is owned by the US company FedEx. Since signing a contract with the Home Office in 2019, it has been criticised for poor communication and missed deliveries.

Passport deliveries are also part of the problem

Alongside issues at the Passport Office, there have been delays with passport deliveries. There have been service failings with TNT, meaning some customers are having to wait weeks for their documentation to arrive.

There have also been complaints of a system ‘meltdown’, with a lack of appointments for the premium-price fast-track service, and unreachable customer services.

Michael Ward paid £142 (€155) for the Passport Office’s fast-track service, but had to cancel a trip to France when his new passport failed to arrive.

One would-be traveller, Michael Ward recently paid £142 (€155) for the Passport Office’s fast-track service, but had to cancel a trip to France when his new passport failed to arrive. The service promises delivery within a week, after the applicant has submitted their paperwork during a face-to-face appointment.

“I travelled three hours for the nearest appointment, and was told to expect delivery seven days later - but my passport never arrived,” says Michael. With his departure date looming, Michael tried to contact the Passport Office but could not get through.

“The departure date came and went and I’ve still not received my passport,” he adds. “The experience has been extremely stressful and I’ve lost a lot of money. There is clearly a communication breakdown that isn’t being addressed”.

What can you do if your holiday is cancelled due to a delayed passport?

For those who have lost holidays, cases can be taken to the Financial Services Ombudsman as most travel insurers do not pay out for trips that have been cancelled due to passport issues.

The Financial Ombudsman may ask the insurer to pay out if the customer can prove they have actively taken steps to secure their passport in time.

You can find out more about the passport application process and how to apply on the government website here.