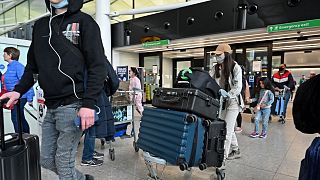 Holidaymakers at Heathrow Airport, London, have been arriving early to try and beat the queues over Easter.   -   Copyright  AFP/Justin Tallis
By Lottie Limb  •  Updated: 19/04/2022

Security vetting for aviation workers will be fast-tracked under UK government plans to tackle the ‘chaotic’ scenes at airports in recent weeks.

Recruiting more staff is key to solving delays at major hubs including Heathrow, Manchester and Edinburgh. But with background and security checks taking a minimum of 14 weeks, airports and airlines have been struggling to get up to speed since travel restrictions lifted.

Companies will be able to train staff before their security vetting is complete, according to a leaked letter from UK aviation minister Robert Courts to industry bosses.

To change the law, the government must first get legal approval from Parliament. Courts says he intends to bring the issue to MPs before the end of April, in the letter seen by the Sunday Telegraph.

“I want to stress that while we are acutely conscious of the need to get more staff into your operations, we have to balance this against the risk of insider threat and other security factors,” he wrote. “This will always be our primary focus.”

New recruits will not be allowed to work ‘airside’ at airports - with access to planes and runways - until their security clearance is complete.

Airports have rigorous security systems to guard against the threat of terrorism. Security vetting is distinct from background checks and - in combination with other verifications for aviation staff - typically takes up to 15 weeks.

With airlines recently forced to cancel up to 1,000 flights a week because of staff shortages - also due to a recent COVID spike - the government has been looking at measures to ease the industry’s pressures (and holidaymakers’ stress).

In response to this news, a government spokesperson told the Financial Times that, “we are looking at ways to help industry speed up job reference checks,” by “using our post-Brexit freedoms.”

However, the law on background checks was retained after Brexit, which is why Courts is seeking new legislation to loosen the requirements.

This ‘statutory instrument’ - which allows a law to be altered without Parliament passing a new act - will enable “greater flexibility on the need to have gone through industry managed identity and background checks before training can begin,” Courts wrote.

Having made thousands of workers redundant at the start of the pandemic, companies have been overwhelmed by the influx of travellers over Easter - the first holiday since the UK scrapped all COVID travel restrictions in March.

Transport secretary Grant Shapps said the government has been “warning [airports and airlines] for a long time they would need to gear up again.” But a spokesperson for Heathrow told Euronews Travel that a regime of constantly changing travel restrictions has made it very difficult to undertake any long-term planning on when travel would reopen at scale.

Speeding up the recruitment process is only one part of the answer, according to aviation union Unite. General secretary Sharon Graham previously said that “the sector is suffering from a chronic inability to attract new staff because workers are not attracted to an industry where pay is poor and conditions are lousy.”