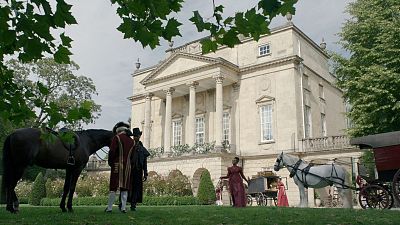 To recreate Regency-era London in all its pomp and glory, the producers of Bridgerton cherry-picked the finest locations in Britain. You’d get dizzy if you tried to visit all of them, on a gilded tour from Hampton Court Palace to Castle Howard in York.

But if you are looking to visit as many as possible, then the southwest and, in particular, Bath is the place to start. Having spent a year in this beautiful city, there’s no doubt in my mind that Bath is not just a major filming location for the audacious, Netflix record-smashing romance show, but its spiritual home.

Yes, Julia Quinn’s books are set in the fashionable ‘ton’ of London, but it’s not one any Londoner would recognise. Bathonians on the other hand (yes, that’s their real noun) walk along film set-worthy streets every day in this UNESCO World Heritage Centre.

From its Roman Baths to honey-coloured Georgian crescents, history enthusiasts have long flocked to Bath. You don’t have to be a Bridgerton-lover to enjoy this city guide, but it probably helps.

Where in Bath was Bridgerton filmed?

If it’s the thrill of a film set you’re after, your first stop needs to be the Holburne Museum. You’ll recognise the outside of this gorgeous, Grade I listed building as Lady’s Danbury’s home. The scene of much agonising between the Sharma sisters in series 2.

Inside, it has an impressive collection of decorative arts, an exhibition on the Tudors and - if you want a more meta experience - work by a contemporary Glaswegian artist who plays with the dual role of the Holburne as both gallery and film set.

Out the back is a modern cafe - the perfect place for a hot drink before you take a stroll around Sydney Pleasure Gardens.

Other great places to promenade are the Pleasure Gardens in the centre of town, with fine views of the River Avon and Pulteney Bridge.

Overshadowed by a giant plane tree, Pickled Greens, a cafe on Abbey Street, is the site of the Modiste shop. But if historical dresses are your thing, you’ll get your fill further up the road at the Bath Fashion Museum.

Austenland: Where else should period drama queens head in Bath?

If you binged Bridgerton there’s a good chance you’ll also adore Jane Austen’s novels. There’s really no comparing Shondaland’s script and Austen’s literary works, but there are some of the same satirical strokes and romantic tensions. The “will they, won’t they” of Kate and Anthony’s story echoes Lizzie and Darcy’s tussle towards love, for one.

And Bath has long been Austen-central. There’s the Jane Austen Centre, complete with a Regency tearoom. There’s a section dedicated to memorabilia from generations of past Austen actors - including a particularly witty letter from Emma Thompson.

For hardcore Austen fans there’s also the Jane Austen Festival in September - 10 days where you can spot bonneted ladies walking between events.

More generally, book lovers are well-served in Bath. There’s Mr B’s Emporium, a treasure trove on John Street with a recommendation service that doesn’t miss. And Toppings, now on York Street, with even more space for its fine shelves. Both heaven, as far as the bookish Eloise Bridgerton would be concerned.

Are the Roman Baths worth a visit?

Yes, absolutely. It doesn’t matter which bit of history you like best, the Roman Baths are not to be missed. This is the bedrock of the city as Bath’s natural thermal springs are what made the Romans think it was worth sticking around. Remnants of the temple they built are still standing beneath nineteenth-century renovations.

These layers of natural and archaeological history are what make it such a fascinating visitor experience. You can watch steam rise from the ‘sacred spring’ and look at the artefacts that the ancient Romans threw in. Some of these are hilariously mundane, like a curse tablet that wishes ill on whoever stole their bathing tunic and cloak.

It’s an interactive experience, too. With costumed actors around the pools, and the opportunity to take a sip of the peculiar tasting spa water containing 43 minerals.

Where is good to eat and drink in Bath?

Bath has plenty of lovely independent cafes, restaurants and bars in which to break up your day-tripping.

It caters especially well to vegetarians and vegans, with the wonderful CASCARA on Upper Borough Wells serving the best coffees, juices and snacks all day. If you are looking for something more substantial, The Green Rocket on Pierrepont Street offers deliciously detailed plant-based meals.

Sally Lunn’s is a big hit with its huge Bunns and ye olde eating experience. But to beat the queues - especially over the Bank Holiday weekend - head up to one of the roomy Boston Tea Party cafes, a small south-west based chain with loads of options.

For quick treats, also on Kingsmead Square, try the hearty samosas from Chai Walla, and the ice cream from Swoon - an award-winning gelateria.

Come evening, The Dark Horse bar is the place to be, serving exquisite cocktails in an intimate underground space. The Opium Bar, behind Pulteney Bridge, has also perfected its mood lighting - in a more eccentric venue.

Where are the best places to walk near Bath?

Set in the Avon Valley, you don’t have to walk far from Bath to get some stunning views of the city. If you feel like stretching your legs beyond a promenade, set off on the Bath Skyline walk, signposted by the National Trust. It takes in sham castles, beautiful woods, downs and - with a little detour - the landscaped gardens of Prior Park.

If you blur your eyes from the top of the valley and start seeing double - this might just be the closest to Bridgerton you can get.

Somerset has so many other great walks if you want to take your explorations county-wide. The Mendip Hills, Cheddar Gorge and Glastonbury Tor will reward you with spectacular views over one of the greenest parts of the UK.