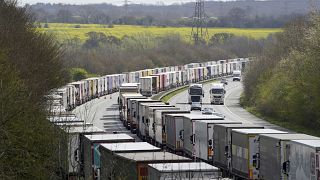 Taking advantage of the UK’s Easter break for a long-awaited getaway? So is everyone else - and that’s going to be the problem.

Major UK airports like Manchester, Heathrow and Dublin have hit the headlines for all the wrong reasons in the past week. Now, other transport sectors are being hit hard as they try to scale up operations after two years of reduced services.

Between over-eager travellers, high Covid numbers, staff shortages, ‘jobs massacres’ and railway maintenance, the Easter break is going to be a chaotic one for travel.

Travellers headed for ferries and trains have been warned of major delays due to the rapid uptick in passenger numbers.

Eurotunnel has announced it expects a surge in traffic from England to France and vice versa, while services operated by P&O Ferries remain suspended after the company fired 800 seafarers.

Where one company misses out, another gains: P&O competitor DFDS is fully booked over the Easter weekend, with some 40,000 passengers. But DFDS has already warned of delays of up to two hours on its services from Dover to Calais on Friday caused by the major disruptions in travel across the Channel triggered by P&O ‘jobs massacre’ and bad weather.

DFDS is not accepting P&O customers let down by the rival company.

It doesn’t get better up in the air.

Those headed for London’s airports would be forgiven for thinking Transport for London (TfL) is trying to mess with them. Victoria and Euston train and tube stations - two of London’s key transport hubs - are closed from Friday 15th to Monday 18th April.

All Southern Railways trains between Victoria and East Croydon have been cancelled over the weekend, a move that will leave passengers landing at Gatwick or trying to reach the airport in a bind.

On top of that, the London Underground line that goes out to Heathrow, the Piccadilly line, will be suspended over the Easter weekend.

There will be replacement buses for the train journeys that have been suspended between Liverpool Street Station and Stansted airport. The airport is expecting its busiest time since the beginning of the pandemic, with an estimated 1.3 million passengers travelling through Stansted during the Easter weekend.