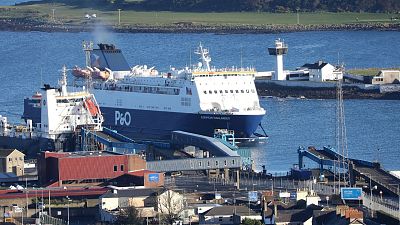 UK Prime Minister Boris Johnson has said that it looks like P&O Ferries broke the law by suddenly firing 800 workers last week and the government will be taking action.

“If the company is found guilty then they face fines running into millions of pounds,” he told the House of Commons. Johnson added that the government will be taking steps to protect all mariners working in the UK, ensuring that they are being paid minimum wage.

The ferry company has also issued a public apology for sacking the 800 staff last Thursday at short notice. It said that it will pay out £36.5 million (€43.8 million) in compensation to some workers that were let go.

P&O Ferries claims that it is the "largest compensation package in the British marine sector," adding that it did not break the law by making hundreds of staff redundant.

Chief executive Peter Hebblethwaite said that despite being "painfully aware" the redundancies had caused distress, the company saw "no other viable means of preserving our iconic British business."

Unions, however, have said that the compensation package being offered was "pure blackmail and threats."

"These are the actions of a bully trying to maximise profits by sacking workers and replacing them with agency staff below the minimum wage," says general secretary of the Maritime Union RMT Mick Lynch.

"The pay in lieu of notice is not compensation, it is just a payment staff are contractually entitled to as there was no notice given."

Lynch claims that if the staff do not sign up, giving away their jobs and legal right to take the company to an employment tribunal, then they will receive a fraction of the amount offered to them.

P&O Ferries, which sails major routes including between Britain, France and Ireland, announced last week that it was halting all journeys to "secure the long-term viability" of the company.

UK parliamentary under secretary for transport Robert Courts told the House of Commons that passengers should expect some disruption as the company struggles to find new crews.

"We of course have long planned contingencies for this sort of situation, particularly around the Channel, and I do not expect the supply of critical goods and services to be impacted as a result of the decision by P&O, although queues on the way to Dover are more likely to occur at times," he said.

P&O Ferries stated that the "tough decision" was made to ensure a bright future for the business. Employees were reportedly told on a video call on Thursday that it was their "final day of employment" but some crew members defied orders and refused to leave their ships.

P&O Ferries has a fleet of more than 20 ships that sail across the English Channel, North Sea, and Irish Sea. It has almost 4,000 member employees and operates more than 30,000 sailings a year.

The fired staff worked on eight ships that ran services including Dover to Calais and Larne to Cairnryan.

What should I do if I have a booking with P&O Ferries?

In a recent post, the company said: "If travelling on our Dover/Calais route please arrive at the port as booked and we will arrange to get you away on an alternative carrier as quickly as possible.

"Once at the port please make your way to the DFDS check-in booths."

#PODover#POCalais Services today remain cancelled. Please arrive as booked, we will get you away on an alternative carrier as soon as possible. Once at the port please head to the DFDS check-in booths. We apologise for the inconvenience this may have on your journey plans,

Those travelling to Ireland may have to buy a new reservation with a different ferry company and passengers for the Hull to Rotterdam route face some of the biggest disruptions. The closest alternative runs from Harwich to the Hook of Holland and is operated by Stena Line.

Crossings that can't be made due to the disruption will have to be refunded by P&O Ferries.

Union RMT said it was disturbed at the news and has advised its members to remain onboard ships.

The UK government called the treatment of the workers "wholly unacceptable".

"Reports of workers being given zero notice and escorted off their ships with immediate effect while being told cheaper alternatives would take up their roles shows the insensitive nature by which P&O approached this issue," Courts told the House of Commons.

"I would have expected far better for the workers involved."

The company is now facing a wider backlash with Labour Mayor for Greater Manchester Andy Burnham calling for a boycott on Twitter.

The travel trade has responded too, with some tour companies refusing to book ferry crossings with the carrier. Easyjet also added fast-track applications for UK cabin crew roles for P&O Ferries employees saying in a Twitter post that they were "thinking of everyone impacted today."

Following the sad news about redundancies at P&O Ferries, we'll fast-track applications for UK Cabin Crew roles from P&O Ferries employees and reach out to impacted employees: https://t.co/YZY2oA3t4X. Roles are also available at our Luton HQ. Thinking of everyone impacted today? pic.twitter.com/qgsOGayv9d

What is the impact on P&O Cruises?

P&O Cruises has also been bearing the brunt of P&O Ferries' decision to sack 800 staff members. The cruise firm has had to respond to abuse on social media clarifying that, despite sharing a name, it is not linked to the ferry company

P&O Cruises is part of Carnival Corporation & PLC and as such is entirely unrelated to P&O Ferries.

P&O Cruises was sold to the Carnival Corporation in 2003 and is based in Southhampton UK. Bookings with the company, therefore, will not be affected by the mass firing or suspension of services.