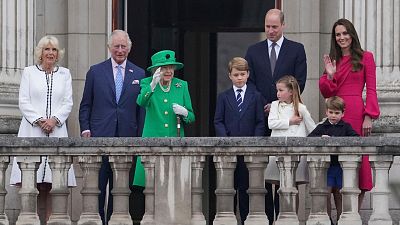 The Royal Family appear on the balcony of Buckingham Palace during the Platinum Jubilee Pageant.   -   Copyright  Jonathan Brady/Pool Photo via AP, File
By Euronews  •  Updated: 17/09/2022

After the death of Queen Elizabeth II, people in the village surrounding her Balmoral residence revealed she spoke to them in the local Doric dialect with ease.

This distinctive form of the Scots language is spoken by people in the northeast of Scotland. Her Majesty was apparently so comfortable switching into this dialect that even older residents of the village close to the estate felt comfortable conversing with her.

But the Queen’s language skills weren’t just limited to local Scots dialects - and neither are those of the rest of the Royal Family.

As global diplomatic figures, they are reportedly required to know at least two languages.

Here are all of the European languages spoken by the British Royal Family.

One of the most widely spoken European languages in the British Royal Family is French.

Queen Elizabeth II was close to fluent and, in her role as a diplomat, she delivered speeches and addresses in the language throughout her 70-year reign.

In 2020, King Charles III spoke fluent French to President Emmanuel Macron during his visit to the UK.

The Queen Consort, Prince William, Prince Andrew, Princess Anne and a whole host of other members of the Royal Family also have some proficiency in the language.

German is another language spoken by many of the Royal Family.

Prince Harry spoke some German in Düsseldorf earlier this year, admitting that he wishes he spoke the language as well as Prince Phillip. The late Royal was of German descent and apparently was pretty fluent in the language but rarely ever spoke it in public.

King Charles III also reportedly speaks German very well, a skill he demonstrated several times at ceremonies and events in the country. Prince William is said to have a strong knowledge of the language too.

The relationship between the British Royals and Greece has long been a complicated one. Queen Elizabeth II visited an incredible 120 countries during her reign - but never Greece.

Her husband, Prince Phillip, was born there but left as an infant when his family fled the country. He could understand small parts of the language but not much.

King Charles III, however, is a noted Hellenophile and has embraced his familial connections to the country. He reportedly speaks near fluent Greek and has visited the country on numerous occasions, showcasing this skill.

Both Prince George, Princess Charlotte and Prince Louis have apparently picked up some Spanish from their nanny, Maria Teresa Turrion Borrallo. When George was four years old, the Princess of Wales revealed while speaking at an event that he could count up to 10 in the language.

Princess Charlotte is thought to be even more proficient, with Prince Louis also picking up some Spanish from their nanny.

After serving as the Prince of Wales for 64 years, King Charles III can speak some Welsh. In preparation for his official investiture, he studied Welsh history and language at the University College of Wales in Aberystwyth for a term during his second year of studies.

He has used Welsh in a number of public addresses over the years but, it having been so long since he studied the language, it's unlikely he’s fluent.

As his son, Prince William takes over the title - he, too, is proud of his Welsh skills. Both he and the Princess of Wales reportedly studied the language for some time while living in Wales but are also less than fluent.