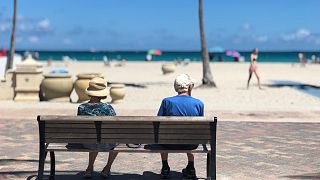 With the current cost of living crisis, more people than ever are looking for alternative living arrangements.

But relocating isn’t just for digital nomads temporarily picking up to move to sunny countries during winter.

Searches for the “best country to retire to from the UK” have risen by more than 90 per cent in the last 12 months. It shows there is an increasing desire for older people to move in search of a better quality of life.

Now a new analysis from Penfold has revealed the best countries for Brits to retire in.

The financial experts looked at the top countries retirees already look at and compared them using 12 different lifestyle factors including exchange rates, healthcare costs and the amount of money required to apply for a visa.

What are the top three countries to retire to?

Ireland came out in a surprise third place on Penfold’s list. Good healthcare, lots of green spaces and close proximity to the UK make up for the less-than-ideal climate.

It was also one of the happiest and safest countries to settle in with retirees only needing €7,000 in their bank account to apply for a visa.

In second place was Spain - well known as a popular destination for British retirees. The country offers warm weather, beautiful beaches and easy access by train or plane for friends and family to visit.

Spain also scores highly for happiness and safety, earning the country its high position in the list.

Croatia came out at the top of Penfold’s list with a much better cost of living when compared to the UK. The price of rent and day to day living was almost half of what it is for Brits who stay at home.

It also only takes an average of 2 hours and 5 minutes to get there with relatively cheap flights from the UK. The financial requirements for visa applications were one of the lowest (around £2,839 or €3,276) and healthcare costs were also low.

What are the cheapest countries to retire to?

When it comes to cost of living, countries like the Philippines, Thailand and South Africa came out on top with prices around half of what they are in the UK. In Europe, the cheapest places to live outside of the top three countries to retire in were France, Italy and Cyprus.

What are the best European countries for healthcare?

Healthcare is another important consideration for anyone looking to move abroad later in life. Though it is one of the best for quality, the cost of healthcare in Ireland was among the highest. Others on the list with low prices had some of the worst quality. Countries like Spain offer the best balance, according to Penfold’s rankings.

Many countries also require you to have a certain amount of money in your bank account to apply for a visa. It can make relocating when you retire hard if you don’t have a huge amount in savings. But even countries including Canada, the US and South Africa will still allow you to obtain a permanent visa with the equivalent of £10,000 (around €11,500) or less.