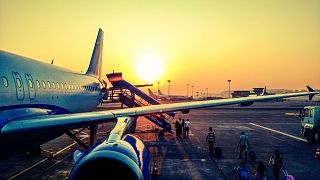 The recent closure of EU airspace to Russian aircraft has caused airline shares to drop this week.

Shares in European airlines and airport operators were down 3-6 per cent in early trade and Finland's largest carrier, Finnair, saw its shares tumble by 21 per cent.

Without access to Russia's airspace amid the ongoing conflict, carriers will have to divert flights south while also avoiding areas of tension in the Middle East.

For Finnair that could mean a loss of business as it uses a route across Russian skies from Europe to Asia - via its hub in Helsinki.

In Asia, Singapore Airlines said on Monday it was suspending all services to and from Moscow until further notice for "operational reasons".

Korean Air, Japan Airlines and Japan's ANA Holdings say they are continuing to use Russian airspace but have no plans to add flights to Russia or Europe to replace flights cancelled by European carriers.

Passenger demand to Japan and South Korea has been low due to COVID-related travel restrictions.

In Asia, Singapore Airlines said it was suspending all services to and from Moscow until further notice.

In Russia, Aeroflot announced on Sunday it would cancel all flights to European destinations after European Union foreign policy chief Josep Borrell said the EU had decided to close its airspace to Russian traffic.

The United States is considering similar action, but has yet to make a final decision, according to US officials.

The US government is encouraging citizens to consider leaving Russia immediately on commercial flights, citing an increasing number of airlines cancelling flights.