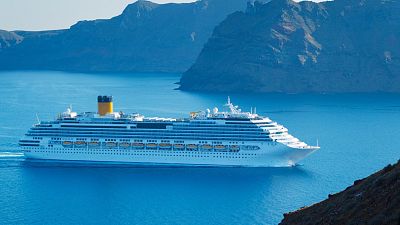 The US public health agency lowered its pandemic travel warning for cruise ships last week, from “very high” to “high”.

It’s the first sign of easing since December, when the CDC advised people to avoid the liners completely because of an increased risk from COVID-19 as the Omicron variant spread rapidly.

The floating towns were like petri dishes when the virus first struck. An outbreak on the Diamond Princess infected more than 700 people and killed 14. The ship was quarantined outside Japan for 27 days, making it one of the early pandemic horror stories.

Two years on, our progress against the virus has made cruise ships far more ‘Covid-secure’.

“The safety of our guests, crew members and communities is Princess Cruises’ top priority,” says Tony Roberts, vice president of Princess Cruises UK and Europe, which is owned by cruise giant Carnival Corporation.

“Cruises are one of the safest types of holiday, and the cruise industry is the only industry in the travel and tourism sector that is requiring both vaccinations and testing for crew and guests,” he claims.

What are the Covid rules on cruise ships?

Princess is among a number of operators requiring guests to be fully vaccinated - Disney Cruises have extended this to under-5s - and all passengers must take a supervised PCR or antigen test before boarding.

Currently, it is also telling all crew and passengers to wear a mask in indoor areas. Other measures include:

Is it safe to go on a cruise right now?

If you have a Baltic or Balkan cruise booked this year, then you may find that the itinerary has been altered, or that your trip has been cancelled altogether due to the Russian invasion of Ukraine.

"We are currently working to confirm replacement ports and will advise all impacted guests and travel advisors as soon as possible," a company spokesperson from Norwegian Cruise Line said in a statement.

Many of the cruise company’s liners usually stop in the Russian city port of St Petersburg in the summer months, but are not willing to do so given the current circumstances.

What about the environmental impact?

Cruise ships are notoriously bad for the environment, and research released last year showed that passengers on a seven-day Antarctic voyage produce as much CO2 as the average European does in an entire year.

According to Friends of the Earth, while some cruise liners such as Norwegian-based Hurtigruten are leading on sustainability, others are trailing behind.

Many of the ‘actions’ cruise companies have taken are lip service instead of real, quantifiable sustainability initiatives.

Marcie Keever
Oceans and Vessels Program Director for Friends of the Earth U.S.

“Hurtigruten is doing good work and is a leader on sustainability with their hybrid ships, battery technology and shore power operations,” says Marcie Keever, Oceans and Vessels Program Director for Friends of the Earth U.S.

“However, the majority of the industry – especially companies like Carnival Corporation, Royal Caribbean and Norwegian, which have the largest ships – are significantly lagging behind.

“Many of the ‘actions’ cruise companies have taken are lip service instead of real, quantifiable sustainability initiatives.”

Can cruise ships ever be sustainable?

In 2021, Hurtigruten’s MS Fridtjof Nansen was voted the most sustainable ship in the world by Scope ESG Analysis due to its battery-hybrid technology. Single use plastic has also been banned aboard Hurtigruten’s vessels as well as heavy fuel.

Not all cruise companies are moving in the same direction though.

“Carnival Corporation is in its last year of a 5-year criminal probation in the U.S. for its ongoing failure to comply with current environmental laws and regulations —laws and regulations that need to be much stronger in many cases,” continues Keever.

For years the cruise industry has failed to make the changes and upgrades needed voluntarily despite a few bright spots, let alone comply with current rules.

Marcie Keever
Oceans and Vessels Program Director for Friends of the Earth U.S.

“For years the cruise industry has failed to make the changes and upgrades needed voluntarily despite a few bright spots, let alone comply with current rules.

In order to name and shame the worst offenders, Friends of the Earth have been producing a Cruise Report Card for the past three years, ranking the best and worst liners in the industry.

“We need the U.S. Congress and the Biden Administration to step up, along with international bodies like the IMO, to really crack down on the cruise industry. These companies have repeatedly shown that they will only travel towards real sustainability if their bottom line is at stake.”