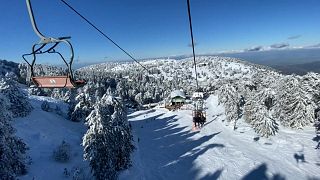 Cyprus is known as a sunny winter getaway, a perfect short-haul destination to escape the cold winter days of Northern Europe.

But did you know you can ski there too?

The Troodos mountains is the largest mountain range in Cyprus, peaking at 1,952 metres on Mount Olympus.

As you can imagine, it’s not an enormous resort with just 4km of slopes and five ski lifts. And the season only lasts for a few months, starting in January and running until the end of March.

If you do fancy a few days skiing in Cyprus though, the Troodos Mountains has the Sun Valley and North Face ski areas. In Sun Valley, there’s a shop run by the Cyprus Ski Club where you can hire all your equipment - skis, snowboards or cross country skis if that’s more your thing.

The resort is around a one hour drive from the popular seaside town of Limassol or the capital, Nicosia.

Although the weather at the start of the year isn’t scorchingly hot outside of the mountains - the average daily high in Limassol in February is 17C - you could certainly choose to spend your morning walking on the beach, and your afternoon hitting the slopes.

**Watch the video above to see the Cyprus slopes in action. **