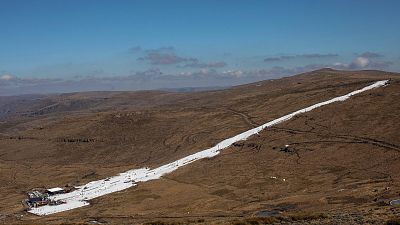 For most people, a holiday to Africa brings to mind images of sun-soaked plains, tropical rainforests and herds of migrating wildebeest.

But much like Europe, the continent contains a number of mountain ranges with enough seasonal snow to host potential slopes.

One such resort is tucked away in the kingdom of Lesotho - a landlocked nation encircled by South Africa's Drakensberg mountain range.

“People think of the Alps, the Rockies in Canada and bigger mountains. But this area of Lesotho has a unique climate because we're sitting at 3000 metres and the top of the mountain is just 3,222 metres.”

Hitting the slopes for the first time

Skiing may be an unlikely pastime in southern Africa, but there are still lessons available for those brave enough to hit the slopes.

Ramokotjo Hope is a professional skiing and snowboarding instructor who works at the Afriski resort.

“For me, as a local, I don't have to fly out: I've got a vacation right here," smiles Hope, who is keen to pass on his skills to other aspiring skiers.

"I love giving new knowledge to people and I also love progression - seeing it happen actually makes me very happy."

Under his tutelage today are two first-time skiers: Kevin Kava and Mbeziwe Seoko.

Both take turns ascending and descending the one-kilometre slope, slowly perfecting their snowplough techniques under the hot African sun.

"It was something very different,” says Kevin, who is visiting the resort from his home in Cape Town.

“My knees and feet are in pain, I broke a sweat unexpectedly, but it was mad fun.”

Mbeziwe Seoko, meanwhile, spent most of the lesson on her knees.

"It was my first time, actually my partner suggested I try it out,” she says. “I wasn't open to it because I'm afraid of heights and all that, but here I am and I'm enjoying it. I feel like a 10-year-old.”

The resort boasts six runs and operates between the winter months of June and August.

In the summer, Afriski entertains guests with a selection of extreme sport activities, including mountain biking, guided motorbike trips and trail running.