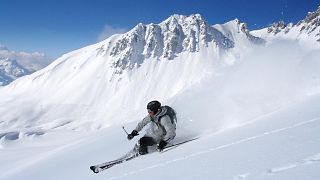 Drawing in the likes of winter sports enthusiasts, royalty and après-ski party-goers, the Arlberg region in western Austria is one of Europe's top ski areas.

Known as the 'cradle of alpine skiing', the resort boasts 88 ski lifts and 305 kilometres of marked ski runs between the towns of St. Anton, St. Christoph, Stuben, Zürs and Lech.

Thanks to this extensive cable car infrastructure, 200 kilometres of deep powder snow descents are easily accessible, giving it a solid reputation for off-piste skiing.

But the Arlberg's legendary status is rooted in history, with local pioneers such as famous ski teacher Hannes Schneider hailing from the region.

Born in Stuben am Arlberg, he founded Austria's first ski school in St. Anton in 1921.

He then went on to revolutionise skiing with the creation of the 'stem christie' technique, the precursor to the parallel turn.

Often referred to as the Arlberg technique, this is a series of movements starting with the snowplow and progressing to turns made with the skis in parallel.

The technique quickly spread worldwide - from Japan to the USA - and underpins many teaching practices still used today.

The home of alpine skiing

At around 1,800m in altitude, the village of St. Christoph am Arlberg played an important role in the history of the Austrian skiing technique.

It is home to the Ski Austria Academy, a renowned alpine training centre for ski instructors.

Former trainer of the Austrian female ski team, Herbert Mandl, is now head of the academy.

"All the training courses that have something to do with alpine skiing take place here in St Christoph, from the ski instructors to the trainers," explains Mandl.

"This house has a very great tradition and history, perhaps starting with the first head, Professor Kruckenhauser, who actually created the education system here."

In the 1950s, Kruckenhauser popularised what is now known as the ‘wedeln’. The technique involves a series of short parallel turns executed in rapid succession.

Across the street from the Ski Austria Academy lies the Arlberg Hospiz Hotel, a well-known five-star resort which was once the site of a shelter for weather-stricken hikers.

It was here that six friends founded the Ski-Club Arlberg on 3 January 1901.

"I don't think that these six founding members would have thought that over 120 years later this Ski-Club Arlberg would still exist," says Wilma Himmelfreundpointner, Ski-Club Arlberg’s Managing Committee member.

According to Himmelfreundpointner, it is "the most successful ski club in the world and has over 8,000 members."

With 91 medals from both FIS Ski World Championships and Olympic Games, it’s hard to disagree with her.

"We didn't invent skiing, but many developments and evolutions of skiing originated here," she adds.

Schneider's Arlberg technique remains at the forefront of these techniques.

"I met a 91-year-old lady in America, who said ‘I have been through the Arlberg,’” smiles Himmelfreundpointner.

Watch the video above to see Austria’s largest ski resort.