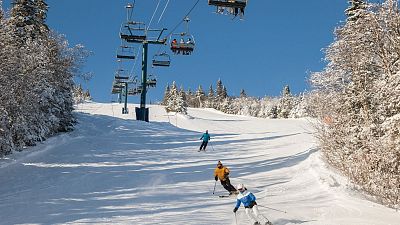 When the snow falls, skiers can be found in St Moritz. That’s according to the latest ski season report from Club Med, which indicates that European tourists will be sticking closer to home this year.

The pandemic is continuing to shape our travel choices, and almost half of the 2,000 people surveyed said they are considering a new destination for their winter sports holiday.

Many resorts are set to welcome winter holidaymakers back for the first time in two years. As well as eager (if a little rusty) skiers returning to the slopes, there will be a new crowd taking up the sport, the new report from the package holiday pioneers suggests.

Ski holidays are back in vogue

62 per cent of people said this year will be their first ski or snowboarding holiday versus only 40 per cent in 2020. The majority of those first-time skiers are choosing a winter sports vacation because their usual type of trip isn’t available due to COVID-19.

As for destinations, Switzerland ranked as the top choice (37 per cent) for British travellers, followed by France (33 per cent) and Austria (24 per cent), with all three countries seeing increases on last year.

As well as the traditional Alpine destinations being back in high demand, one in ten people surveyed say they would now consider a winter break in Scotland.

“The last two ski seasons have been filled with disruption and we understand people are more eager than ever to hit the slopes,” says Estelle Giraudeau, managing director of UK & Northern Europe at Club Med.

The tourism company’s spots in the French Alps - including Val Thorens Sensations, Alpe d’Huez and Les Arcs Panorama - are its current “bestsellers” over the 2022 February half term, New Year’s week and the Easter holiday periods.

Where else do skiers have their sights on?

Colorado's ski resort city was in fact the number one place that skiers have, or would like, to book for their winter sports holiday, according to the report. Aspen Mountain, in the Rocky Mountains of North America, is an undeniably majestic place to carve up the white stuff.

But given the late lifting of US travel restrictions, that’s not where Club Med thinks most people will end up.

Tourists are booking their holidays increasingly later, due to uncertainty over travel rules, and the Alps may be due a late surge.

The most popular resort in the Alps was the sought-after, stylish Saint Moritz. Two French Alpine ski resorts, Les Deux Alpes and Alpe d’Huez were runners up, and also deliver on traditional, high-altitude glamour.

Canada is the top long-haul destination for a winter sports holiday, according to Club Med. The all-inclusive specialists have just opened their first ever Canadian resort, Quebec Charlevoix, in the Le Massif de Charlevoix area.

It’s billed as “the first Club Med mountain resort with waterfront view” due to its spot on the Saint-Lawrence river, and spaces for December are filling up fast.

The stunning topography of the Cairngorms is a great location for skiers, first-time or otherwise. With more people holidaying in Europe, the mountain range’s three ski resorts are sure to see plenty more action.

The Lecht is the best option for beginners with its easy-to-ride magic carpet, while Glenshee and Cairngorm Mountain offer more trying terrain for advanced skiers.