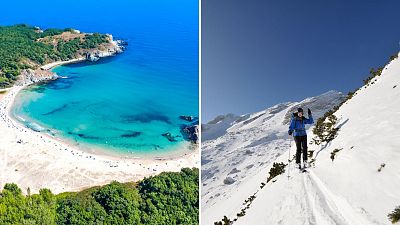 Cliffs on Bulgaria's Black Sea coast are just as stunning as the snowy mountains.   -   Copyright  Canva
By Nichola Daunton  •  Updated: 24/11/2021

As one of the first countries to receive a safety and hygiene travel stamp from the World Travel and Tourism Council (WTTC), Bulgaria is working hard to keep tourists safe.

In October, the country adopted the EU COVID-19 Certificate scheme - meaning that proof of vaccination must be shown when entering restaurants, museums, galleries and cinemas.

The UK NHS app has recently been accepted into this scheme too, so travellers from Britain can visit European venues freely.

Bordering the Black Sea, Bulgaria is one of the most biodiverse countries in Europe, with rare plant and animal species, including the Dalmatian pelican. Packed full of parks and protected ecosystems, this Balkan country is a must for nature lovers, in summer and winter.

The Black Sea coast has been renovated in recent years, and is now home to large hotel complexes and spas alongside golden sand beaches.

The Black Sea coast has been renovated in recent years, and is now home to large hotel complexes and spas alongside golden sand beaches. If you’re planning a winter trip though, there are lots of scenic ski resorts in the country too.

We’ve picked our favourite beach resorts for summer, and ski resorts for winter, so that whatever time of year you visit you’re guaranteed to have a great time in Bulgaria.

As winter is rapidly approaching, we’ve chosen our top three ski resorts. With seven major mountain ranges in close proximity to one another, there’s no shortage of options when it comes to hitting the slopes.

“The mountainous regions of Bulgaria are a popular holiday destination especially during the winter and the spring. For many years, Bansko hosted competitions like the alpine skiing World Cup,” says Stela Baltova, Bulgaria’s Minister of Tourism.

“An hour and a half drive from Sofia, Borovets is another famous ski area, located in the Rila mountain, near the highest peak in the country and in the Balkans – Musala peak, 2925 m.”

Whether you want to stay in one of the bigger resorts, or opt for somewhere simple and small, we’ve got all the bases covered.

The largest ski resort in Bulgaria, Bankso sits at the base of the Pirin Mountains. With a high altitude, there’s no need to worry if there will be snow, in fact the resort’s snow cannons guarantee there will be from December to May.

With 70 kilometres of ski runs and 18 pistes, there’s something for everyone here, with difficulty levels ranging from blue to black.

If you’re not so sure on your feet, lessons are available, and there’s even a thermal pool to relax in at the end of a hard day.

Just 70 kilometres from Sofia, the country’s capital, Borovets, lies on the northern slopes of the Rila Mountains. The resort has a very Christmassy feel to it, as it’s surrounded by pine forest. Plus, at a whopping 1,390m above sea level, it offers some spectacular views.

A resort with royal lineage, it dates back to 1896 when the Bulgarian King, Kniaz Ferdinand had hunting lodges and a summerhouse built here.

A resort with royal lineage, it dates back to 1896 when the Bulgarian King, Kniaz Ferdinand had hunting lodges and a summerhouse built here. Wherever the King went, the aristocracy shortly followed, and many of Bulgaria’s top brass soon had chalets in the region.

If you’re travelling with kids, there’s a children’s ski school. Or if you’re flying solo, there are a number of late night bars and nightclubs.

If you’re an advanced skier, then Malyovista is the place for you. 40 kilometres from Borovets, this resort has just four kilometres of pistes. The highest point of the piste is a black run, but it gets easier as you descend and ends up as a blue run.

The resort is at the foot of the mountain and has a range of restaurant options. Though none of the wild nightlife on offer at the bigger places.

If you’re interested in hiking, Malyovitsa mountain can be climbed in two to three hours and has some picturesque scenery for those alpine selfies.

If all that snow talk has made you feel a bit chilly, let’s warm up with our top three beach resorts in Bulgaria. With a 378-kilometre coast line, Bulgaria isn’t short of beaches.

“The Bulgarian Black Sea coast is a great place for a summer vacation,” says Baltova.

“The beaches and the sea offer excellent conditions for various water sports such as surfing, water skiing, diving, underwater research and fishing, whether from the surface or underwater.”

The country has been heavily investing in its seaside infrastructure to meet rising tourist demand, and there are lots of new hotels and resorts popping up.

We’ve picked our three favourite beach locations, so you can enjoy summer 2022 on the balmy Black Sea coast.

Close to the historic, maritime city of Varna, Golden Sands is a large resort to the north of the Black Sea coast. Set against the backdrop of a wooded hillside, this blue flag beach is also home to Amusement Park Aquapolis.

There’s plenty of watersports on offer in Golden Sands too, from classic banana boat rides to scuba diving. Divers can expect to see Black Sea crabs and seahorses.

If you’re looking for a spot of culture, head up the cliff to Aladzha Monastery, which overlooks the beach. A medieval cave monastery, the cave was inhabited by hermit monks in the 13th century.

If you’re looking for a spot of culture, head up the cliff to Aladzha Monastery, which overlooks the beach. A medieval cave monastery, the cave was inhabited by hermit monks in the 13th century.

If you’re looking for a party beach, then head to Sunny beach. Awash with nightclubs and young European tourists who want to stay up all night, Sunny beach is the biggest party resort on the Black Sea coast.

The beach is five kilometres of sun-drenched hedonism, though you will also find families and children here during the day time.

There are a lot of watersports on offer here too if you’re after an adrenaline rush, as well as jeep safaris so you can explore the surrounding mountains and perfect your archery skills.

Primorsko sits on the southern end of the Black Sea coastline. At the foot of the Strandzha mountain range, Primorsko is actually divided into two beaches, north and south. The sea is very calm here, with minimal waves, making it a great spot for families with young children.

As well as the beach, there’s plenty to see and do in the local area, with hotels and nightlife.

“Investments in luxury hotel categories and in leisure sports and spa facilities are increasing. The coastal landscape has a huge variety of recreation facilities,” continues Baltova.

Bulgaria’s beach season kicks off in May and runs through until the end of September, offering a full five months of sunshine and relaxation.