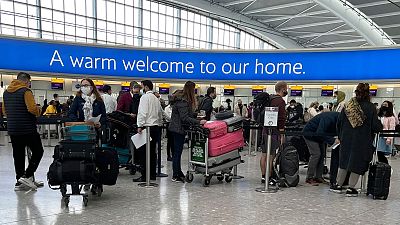 England was one of the first countries to take action, adding a growing number of nations to its red list and tightening rules for all international arrivals.

Travellers and residents landing in England from 4am tomorrow, Tuesday 30th November must now do a PCR test and self-isolate until you get a negative result.

Lateral flow (antigen) tests were previously being accepted, but that’s changed as the government seeks to get a grip on the situation, with at least ten cases of Omicron found in the UK so far.

Given how quickly the changes are being introduced, there are a few areas that are confusing travellers. Here are the grey areas and answers to the questions you had about travelling to England right now.

What happens if your results don’t come back?

The general structure of COVID-19 testing remains the same. Before travelling to England you need to book and pay for a test to be taken before the end of day 2 in the country. This can be taken anytime before day 2, from when you arrive in the airport.

Day 2 tests must now be PCR tests, and, as with lateral flows previously, they cannot be the free ones supplied by the NHS. A list of approved private test providers can be found on the government website here.

It’s then a case of self-isolating until you receive the result. Unlike for travellers coming back from red-listed southern African countries, this isolation period doesn’t need to be in a hotel. You can simply head to wherever you’re staying - whether at home, a friends’ house, or another kind of accommodation, as long as you've put the location on the passenger locator form.

PCR test results can be as quick as three hours. But what if you’re still waiting days later and it seems to have been lost in the ether?

The government website states that if your test result is delayed, you must continue to self-isolate until it comes through or 14 days is up - whichever comes sooner.

That’s a long time to be stuck in one place. Especially as the quarantine period for both vaccinated and unvaccinated travellers testing positive is 10 days, starting from the day you took the test.

The Department of Health and Social Care (DHSC) had no further guidance on this, and did not say whether a free NHS PCR test could be used by a person waiting for their initial paid-for test in this situation.

Do the people you’re staying with need to self-isolate too?

While you’re waiting for your day 2 test, there’s no need for the people you’re staying with to self-isolate too (unless they were also on the trip).

But if your test result is positive then they must follow the same quarantine rules for the same length of time as you.

The DHSC has confirmed that breaking quarantine rules could lead to a fine of up to £10,000 (€11,750) so it’s important to know what they are. You can read more about how to quarantine at home after travelling abroad here.

Can you take a one-day trip to the UK?

It’s not everyone’s idea of a relaxing holiday, but there’s plenty of reasons why you might need to travel to the UK for just a day.

A football fan in Belgium, for example, or a Parisian with family in London might want to take a 24 hour trip - but is that still possible under the new rules?

There’s nothing to suggest one-day trips to the UK are explicitly banned. A note on the updated travel page says that you still need to book and pay for a day 2 COVID-19 test, even if you will be in England for less than two days.

However, with the new requirement for people to self-isolate until their PCR test result returns, at the moment it doesn’t look feasible to make a flying visit to the country.

The DHSC has emphasised that you must quarantine until you have received a negative day 2 test, or until you leave England.

Do you need to do a PCR test if transiting in the UK?

This depends on whether you are staying ‘airside’ (i.e. not passing through border control) or whether you’re connecting transport is ‘landside’ (for example, if you need to travel to another airport or train station to travel out of the country).

Currently there’s no requirement for airside travellers to fill out a passenger locator form (PLF).

Those in landside transit will need to fill the form out, but do not need to book a day 2 test.

The PLF will ask you about this so here’s what you need to do:

Do children need to do PCR tests too?

Families travelling to the UK have different rules to abide by. Children aged 5 to 17 will also need to take a day 2 PCR test instead of a lateral flow - regardless of whether they are vaccinated or not.

However they do not need to self-isolate while waiting for the results, meaning for UK families returning from a holiday abroad, they could go straight back to school. This could depend on the rules set by the child’s school so it is worth checking these before you travel.

Children aged four and under do not have to take any travel tests.

There is more information on travelling with children here.

What are the rules for the Common Travel Area?

The new UK travel rules do not apply to passengers coming from Ireland, Northern Ireland, the Channel Islands or the Isle of Man - which fall under a Common Travel Area (CTA).

Provided you have not been outside the CTA 10 days before arrival in England, there’s no need to fill out a passenger locator form or take a day 2 test.

Ireland has also introduced new rules to stem the spread of the Omicron strain, which will see arrivals from seven southern African countries required to show a “not-detected” PCR test before their flights. This is followed by a quarantine period of 10 days, and two more PCR tests.

Unlike in England, the quarantine period can be at home - rather than in an expensive government-mandated hotel.