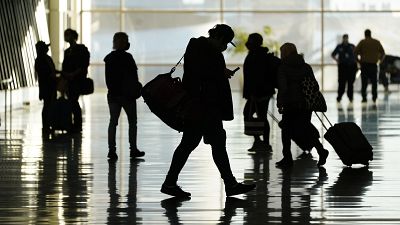 The UK has added ten countries to its red list and made PCR tests on arrival compulsory   -   Copyright  Rick Bowmer/Copyright 2020 The Associated Press. All rights reserved
By Marthe de Ferrer  •  Updated: 05/12/2021

England has added Nigeria to their red list. This is in addition to the ten southern African countries that were added to the red list last week.

The return of the red list comes after the B.1.1.529 COVID-19 variant, also known as 'Omicron', was detected in South Africa and Botswana.

Travellers arriving from South Africa are now required to stay in quarantine hotels on arrival in the UK, along with arrivals from ten other southern African nations.

The World Health Organization has classified the new Omicron strain as a 'variant of concern.'

Arrivals from red list countries now have to go straight into quarantine in government-mandated hotels. This costs around €3,000 per person, for a 10-day stay.

At a press conference last week, UK Prime Minster Boris Johnson said, "This variant is spreading around the world, with two cases so far identified here in the UK.

There is also a very extensive mutation which means it diverges quite significantly from previous configurations of the virus, and as result, it might - at least in part - reduce the protection of our vaccines over time. So we need to take targeted and proportionate measures now as a precaution while we find out more."

Some approved providers are now offering to upgrade outstanding antigen tests. This would allow you to use your existing passenger locator number for a day 2 PCR test so it is worth checking with your provider if this is possible.

What are the UK's latest rules?

From 4am on 7th December, all arrivals, regardless of vaccination status, must show a negative COVID-19 test on arrival.

You must then take a PCR test on or before day 2 in the country. You must self isolate until you have received a negative result.

Full details on how to get a test and when it must be booked are available here.

The most worrying variant yet

Experts have said that the B.1.1.529 variant could be the most lethal and worrying yet. This is because of its "awful spike mutation profile", which scientists fear could help it evade immunity. Early reports suggest it is capable of reducing vaccine efficiency to just 30 per cent.

There are currently reported cases of the variant in the UK, The Netherlands, Germany, South Africa, Hong Kong and Botswana.

It's believed that officials will now be hoping to track down hundreds of people who have arrived in the UK from South Africa over the past week, in an attempt to avoid introducing the new strain.

More than 500 passengers arrive in the UK from South Africa every day.

Non-UK and Irish residents are not allowed to enter England if they have been in any of the red list countries in the past 10 days.

Anyone who has returned in the last 10 days from red list countries is going to be asked to take a PCR test by the UK Health Security Agency (UKHSA).

Britain has been among the countries hardest hit by COVID-19, with 144,000 deaths since the start of the pandemic.

The number of cases remains high - more than 47,000 in the past 24 hours on Thursday - but more than 80 per cent of people aged 12 and over have received a double injection of the vaccine, and almost 30 per cent have had a third dose.

The UK government has been widely criticised for being slow to tighten travel restrictions at the start of the pandemic, when it kept its borders open as infection rates skyrocketed.