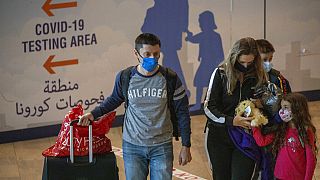 In a bid to limit the spread of the new Omicron variant of coronavirus, Morocco halted all incoming flights and Israel banned entry to foreign nationals as Asia-Pacific countries tightened travel curbs on Sunday.

Scientists say Omicron is a concern because of its high number of mutations and rapid spread.

Here is a round-up of the latest movement restrictions prompted by concerns over the new variant.

Morocco is suspending all incoming air travel from around the world starting Monday for two weeks because of the rapid spread of the new omicron variant, the Foreign Ministry announced on Sunday.

The ministry tweeted that the decision was taken to "preserve the achievements realized by Morocco in the fight against the pandemic, and to protect the health of citizens.” It noted the spread of omicron in Africa and Europe.

Morocco kept its borders closed for months in 2020 because of the pandemic, fearing that its health system wouldn't be able to manage the surges of patients seen in nearby Europe.

The kingdom in North Africa has had among Africa's highest rates of confirmed infections but also is at the forefront of the continent's vaccination effort, with 66% of its population having received at least one dose.

Israel on Sunday approved barring entry to foreign nationals as part of its efforts to clamp down on a new coronavirus variant.

The Health Ministry said in a statement that the country’s coronavirus cabinet had authorised a raft of measures, including red-listing travel to 50 African countries, banning entry by foreigners and mandating quarantine for all Israelis arriving from abroad.

On Saturday, Israel said it had detected the new strain in a traveller who had returned from Malawi and was investigating seven other suspected cases. The seven people included three vaccinated individuals and all were placed in isolation.

In Australia, the New South Wales health department said Sunday that urgent genomic testing was being done on samples taken from two passengers who arrived in Sydney from southern Africa the day before and tested positive on arrival.

The department said the travellers were from one of nine African countries that are now required to quarantine in a hotel upon arrival in Sydney. The countries are South Africa, Lesotho, Botswana, Zimbabwe, Mozambique, Namibia, Eswatini, Malawi and the Seychelles.

New Zealand announced on Sunday it was restricting travel from nine southern African countries because of the threat posed by the variant.

Japan widened its border controls to include more countries from the region.

Tourist-dependent Thailand, which only recently began loosening its tight border restrictions to leisure travellers from certain countries, announced a ban of its own on visitors from eight African counties.

Similar restrictions took effect in the business hub of Singapore, which is barring entry and transit to anyone with a recent history of travel to seven southern African nations.

Elsewhere in the world

The tighter restrictions in the Asia-Pacific region echoed steps rapidly taken by countries around the world to limit the spread of the omicron variant just days after it was identified by researchers in South Africa.

The act first, ask questions later approach reflected growing alarm about the emergence of a potentially more contagious variant nearly two years into a pandemic that has killed more than 5 million people, upended lives and disrupted economies across the globe.

While much remains to be learned about the new variant, researchers are concerned that it may be more resistant to the protection provided by vaccines and could mean that the pandemic lasts for longer than anticipated.

Cases involving the omicron variant have already been confirmed on multiple continents, with the Netherlands, Denmark, Germany, Italy, the Czech Republic, Belgium, Israel and Hong Kong all reporting cases in recent days.