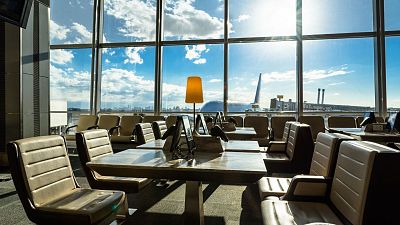 Airports aren't famed for being peaceful spaces - but they do give us the rush we all associate with going on holiday.

Noise and crowds are to be expected. Children are screaming, wheely luggage is reverberating across the floors and announcements can be heard every few minutes, alerting new customers to their boarding gate.

Imagine if you could mute that all out - as if you had put on noise-cancelling headphones and everything became quiet.

That’s now a reality in a select few airports around the world which have declared themselves ‘silent airports’.

What counts as a ‘silent’ airport?

In a bid to make the travelling experience more relaxing for flight passengers, some airports are cutting down on the amount of background noise in terminals.

Instead of tannoys making noise every five minutes, they have now stopped delivering announcements altogether. The only exception is in emergencies, when children have been lost or found, and some flight delays. But there are no final calls and no call-outs for late passengers.

At some silent airports, all announcements are banned in the main waiting area - but exceptions are made inside each gate.

As a result, noise pollution is reduced and it means passengers only focus on important announcements.

While this makes for a less stressful experience overall, passengers still need to be vigilant of their own flight times to ensure they aren't left behind.

Why do we need silence?

Silence offers opportunities for self-reflection and daydreaming, which activates multiple parts of the brain, according to clinical health psychologist in the US Amy Sullivan.

It gives us time to turn down the inner noise and increase awareness of what matters most. That means being still and silent can help you - and can even lower your blood pressure, says Sullivan.

In 2013, scientists conducted a pivotal study on silence by testing on mice. Published in the journal Brain, Structure and Function, it used both noise and silence to monitor the effect sound had on the brains of the mice.

The silence was originally intended to be the control in the study but what they found was surprising. Scientists discovered that when the mice were exposed to two hours of silence per day they developed new cells in the hippocampus (a region of the brain associated with memory, emotion and learning).

These cells then appeared to become functioning neurons so, in a sense, silence can quite literally grow your brain.

While the wellness benefits are clear, some people on Twitter say silence in airports can also bring about some funny (and not so funny) mishaps.

What do people think of silent airports?

In 2015, Bristol decided to become a silent airport in the UK. But one traveller was left outraged after he missed a flight as a result.

Patrick Bury was left behind by his Ryanair flight to Dublin after what he claims was a confusing experience at Bristol Airport. He turned up for his early-morning flight on December 19, and was through security at the airport an hour and a half before take-off.

“A priority boarding announcement was made, and I then expected to hear a main boarding call and final call,” Patrick told Wales Air Forum.

“About five minutes later I went to check again and the gate door was locked. Two employees admitted there were inconsistencies with the system of boarding announcements and said I should complain.”

Others have funnier stories to tell, like this anecdote:

“It's official. There is nothing more uncomfortable than suffering through the opening of the incredibly loud, impossible to remove crinkly plastic wrappers situated on prepared Kosher meals at silent, posh airport lounges.”

“The feminine urge to shout something inappropriate in a very silent airport.”

Some point out the irony:

“Bengaluru Airport is a silent airport” - announced via loudspeakers

“In Mumbai airport, they ring a bell before they announce (even though it's a silent airport), but the bell sounds same as undertaker's entry music. Now every time they ring the bell, I feel like the undertaker is coming.”

But some passengers are fans of the new policy, tweeting that the Dubai terminal is “amazingly quiet and pleasant”.

These are the ones we can confirm have already gone silent.