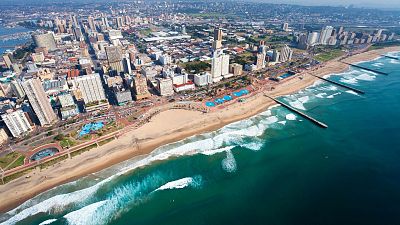 The sunny city of Durban sits on South Africa’s eastern coast in KwaZulu-Natal province. Lapped by the warm waters of the Indian Ocean, Durban enjoys a whopping 320 days of sunshine each year.

So if the thought of another European winter is getting you down, we’ve got everything you need to plan a great trip to Durban.

What are the travel restrictions in Durban?

All travellers to South Africa will need a paper copy of a negative PCR COVID-19 test to show border officials upon arrival. The test must have been taken no more than 72 hours before you departed your country of origin.

Children under five are not required to have a PCR test.

It is advisable to carry several paper copies during your time in South Africa, as you may need to present your negative test result more than once.

If you do not have proof of a negative test result, you will have to take a new COVID-19 test at your own expense and will have to quarantine at your own cost for 10 days if you test positive.

You will also be required to fill out a health questionnaire before landing in South Africa.

You can find out more information here.

There’s still a curfew in place from midnight until 4am though, so nightclubs remain closed at present.

What outdoor activities are there in Durban?

Durban has the longest beach promenade in Africa, stretching eight kilometres along the seafront from uShaka Marine World to the Moses Mabhida Stadium.

uShaka Marine World is home to Africa’s largest aquarium, and gives visitors the chance to dine right next to the shark tank - if you dare. The complex also boasts Africa’s highest waterslide park and a chance to feed Spotted Eagle Rays.

Further along the promenade, you can find Durban’s ricksha bus, which will take you on a 3 hour sightseeing tour of South Africa’s second biggest city.

If you’re feeling more adventurous, you can sign up for a quad biking excursion.

Africa’s oldest surviving botanic garden houses palms, cycads and a collection of over 6,000 orchids. This includes some native specimens which are part of a conservation project.

There are also 90 trees which are more than 100 years old, called the ‘centenary trees’.

Plus, a butterfly garden, rich in nectar and pollen to attract these delicate insects.

What is Durban’s best trail walk?

Firstly, there’s the home of Mahatma Ghandi, who lived in Durban for 20 years, and still has descendants living in the city. Secondly, there is the Ohlange Institute, an African school founded by John Dube, the founder of the African National Congress (ANC).

And thirdly, there is the school’s chapel, where Nelson Mandela voted for the first time at the age of 71.

After Nelson Mandela voted, he then went to the monument where President Doctor Dube was lying and is reported as saying, "Mr President, I came to report that South Africa is free. So that is how significant that area is.”

What can I do in the Valley of a Thousand Hills?

The Valley of a Thousand Hills is just half an hour’s drive from Durban and offers some breathtaking scenery. As you’d expect from its name, it’s a very hilly place, with hills rolling down to the Umgeni River at the bottom of the valley.

The Zulu people have lived in the valley for generations and visitors can learn more about their culture by visiting iSithumba cultural village. Activities on offer in iSithumba include guided hikes, cycle tours and canoeing.

Where can I eat in Durban?

Durban’s signature dish is the Bunny Chow. “The real bunny has got a mix of curries, where you have almost a half loaf of bread, with the interior scooped out and curry poured in and then portion of the bread that has been scooped is put on top,” says Mntungwa.

“And the filling in the bread, it tangles your tastebuds, and this tells you it’s a Durban bunny chow.”

Curries are very popular in Durban, due to the city’s large population of people of Indian descent. To sample them, head to Victoria Market, where you can also buy spices, clothes and handicrafts.

Many of the city’s restaurants can be found on Florida Road, but the city’s best restaurant is in one of Durban’s townships, Umlazi. Max's Lifestyle was voted one of the best 207 restaurants in the world by Conde Naste Traveller in 2016 and serves braai (barbeque) and curries.