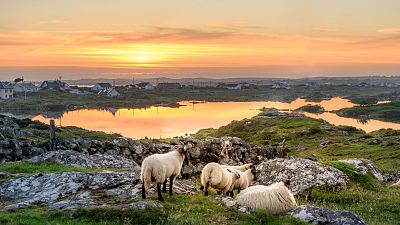 One of the drivers for climate change action - aside from the clear scientific evidence - is arguably reputational risk.

Most countries do not want to be seen as a slacker or behind the curve when it comes to environmental initiative.

But what if a country’s stereotypical image precedes them? What about the countries that are doing very little to combat climate change - yet are still perceived as eco-friendly? And vice versa?

A recent opinion poll by FES in Germany found that 70 per cent of Italians believe that Germany has met its renewable energy targets - which it hasn’t.

While 70-80 per cent of both Italians and Germans believe that Italy has missed its renewable energy targets - when they have actually been met.

“If you really check reality and check data and compare that with the stereotypes you often are surprised,” says Jan Burck, senior adviser at Germanwatch and co-author of the Climate Change Performance Index (CCPI).

The CCPI is an independent monitoring tool for tracking countries’ climate protection performance. It indicates the climate mitigation efforts of 57 countries and the EU, which collectively account for over 90 per cent of global greenhouse gas emissions. Results are compiled with the aid of 400 national experts evaluating their countries’ most recent national and international climate policies.

We asked our readers, here at Euronews Green, about their perceptions of certain countries compared to others when it comes to climate action performance.

The results were surprising.

Ireland is known for its green fields, rugged coastlines and breathtaking scenery. There is no way that a country with such a green image could be one of the worst polluters in the EU...right?

Well, that’s what the vast majority of our readers thought anyway.

In an *ahem* highly scientific Instagram poll, 71 per cent of our followers thought that Ireland had a better climate action performance than Ukraine.

However, the reality is quite a different story. Ireland is actually ranked just 39th on the CCPI compared to Ukraine’s 20th.

If you’re taken aback by that ranking, you’re not alone.

“Even I was very much surprised when I saw that Ireland has 3 or 4 tonnes higher greenhouse gas emissions than the Germans have [per capita]”, says Jan Burck who helped write the rankings. “It is close to Saudi Arabia and you would not expect that from Ireland.”

A green image does not necessarily equal environmental action apparently.

The UK vs Finland

Our next match was the UK against Finland.

Finland’s vast forests and thousands of lakes conjure up images of an environmental paradise - coupled with seemingly faultless perception many people seem to have of Nordic countries.

And perhaps it was this that led to over three quarters of our social media respondents to pick them as greener than the UK.

However, it is in fact the British who ranked higher than the Finns. The former came in at 5th compared to the latter at 11th.

The UK’s high ranking has caused some controversy, though.

The CCPI does note that no country on the list is reaching their Paris agreement targets and even if every country performed at the same level as Sweden, who topped the rankings, it would not be enough to prevent the climate disaster.

But there has been fierce criticism of the UK’s climate actions in recent years. Mohamed Adow, director of the Power Shift Africa think tank has recently accused the Conservative government of greenwashing.

Friends of the Earth climate campaigner Connor Schwartz said earlier this year, “targets for cutting emissions are important, but without the right policies they won’t be met. The UK government is already struggling to meet its existing, less ambitious climate goals.”

One of our own readers tells us how they “have lived in both the UK and Finland...I’m stunned that the plans of one rank higher than the actions of the other.”

In response to these criticisms Jan Burck, the co-author of the CCPI, says, “if you really check the numbers then the UK is one of the countries in the CCPI that are really managing to reduce its greenhouse gases.

“It is really not perfect what the UK is doing,” he continues, “they are not on on track to do enough to fulfil their promises in Paris but the UK is doing much better compared to other countries when it comes to greenhouse gas reduction, emission reduction and to renewables.”

Latvia vs The Netherlands

The Netherlands is, again, a country that, for many, is associated with things you would think give it a decent ranking on the CCPI. Windmills, innovation and of course bikes all often come to mind when we think about the Dutch.

Latvia, on the other hand, is a much smaller country population-wise with just under two million people and is less referenced in popular culture.

Most of our Instagram poll respondents thought that the Netherlands was better on climate action performance than Latvia. And the reality is, as you may have guessed already from the gist of this article, quite different. Latvia ranked a healthy 13th place compared to the Netherlands in 29th.

Professor Dorothee Bohle of the European University Institute’s Department of Political and Social Sciences says that many Western politicians see the continent divided into the ‘good west’ and the ‘bad east’.

Although its status as part of Eastern Europe is debated, Latvia is often associated with the region instinctively. In turn, Eastern Europe is commonly perceived (albeit unfairly) as heavily industrialised - which doesn’t conjure up images of eco-friendly landscapes.

Bohle was speaking in the context of a row late last year within the EU over the next seven-year budget and post-pandemic recovery package. But perhaps this can be applied to how people perceive European countries’ efforts on climate change too.

As one of our readers who was surprised by some the results put it: “maybe we look up to developed countries that are popular.”

Sometimes our perceptions do indeed match up with reality, however.

In this case our Instagram poll respondents were correct. Portugal ranked 17th compared to Spain in 41st.

The CCPI said experts noted “a lack of ambition in Spain’s national climate policy, especially reflected in weak targets and a lack of clear measures in all categories.”

Portugal meanwhile climbed eight places from last year’s CCPI, helped in part by successful green fiscal measures in the fields of renewable energy and transport, energy efficiency policies in the industry sector, and new legislation in the forestry sector.

Did these rankings match up with your perceptions? Let us know on Twitter by joining in the conversation using @euronewsgreen.