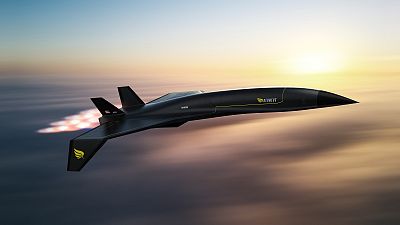 The ability to travel around the globe at hypersonic speed may have moved a step closer to reality following work by scientists in Australia.

Researchers at RMIT University in Melbourne have developed 3D printed catalysts which they say can power hypersonic flight and act as a cooling agent to combat the extreme heat generated when aircraft fly at or above Mach 5, or five times the speed of sound, which is around 6,100 kilometres per hour (km/h).

At those speeds, future commercial airlines would be able to fly between London and New York in around 90 minutes.

Catalysts are compounds added to chemical processes to speed up reaction times without being altered themselves.

By 3D printing the catalysts, they can be moulded into the most efficient shapes to interact with the fuel burning and cooling process.

The overheating problem associated with hypersonic flight has been a major impediment to traversing the world at high speed, a long-held ambition among globetrotters and the airline industry at large.

The researchers' work at the RMIT’s Centre for Advanced Materials and Industrial Chemistry could theoretically lead to the possibility of shrinking flight times from London to Sydney from more than 21 hours currently to just four hours.

The cataylsts are created in metal alloys by a 3D printer and coated in synthetic minerals known as zeolites. When the metal is hot, it reacts with the zeolites.

"Our 3D printed catalysts are like miniature chemical reactors and what makes them so incredibly effective is that mix of metal and synthetic minerals," Roxanne Hubesch, the research report’s first author, said.

To test their design, the researchers replicated the extreme temperatures and pressures experienced by the fuel at hypersonic speeds in a controlled lab setting.

They said that using fuel as a coolant was "one of the most promising experimental approaches" to the problem of overheating.

Their findings have been published in the Royal Society of Chemistry journal Chemistry Communications.

"Powerful and efficient, they offer an exciting potential solution for thermal management in aviation and beyond".

He added that further development could see the 3D printed catalysts being used as cooling agents "in any industrial process where overheating is an ever-present challenge".

"Fuels that can absorb heat while powering an aircraft are a key focus for scientists, but this idea relies on heat-consuming chemical reactions that need highly efficient catalysts," said Hubesch.

"Additionally, the heat exchangers where the fuel comes in contact with the catalysts must be as small as possible, because of the tight volume and weight constraints in hypersonic aircraft".

The concept of high speed in relation to international commercial flights appeared to wane after the supersonic British Airways Concorde – the fastest commercial plane in the world at the time at Mach 2 - was retired in 2003.

Now almost two decades after supersonic flight, in other words, travelling faster than the speed of sound at Mach 1 or more – ended, hypersonic travel is drawing increasing attention.

In August, hypersonic aircraft builder Hermeus was awarded $60 million (€50.7 million) by the US Air Force to fund its engine development and testing. The Atlanta startup building these Mach 5 engines has a mission to reduce the flight time from New York to London to under two hours.

In June, another US company called Boom Supersonic received an order from United Airlines for 15 of its Overture supersonic jets, the first of which is scheduled to be ready for passengers by 2029.