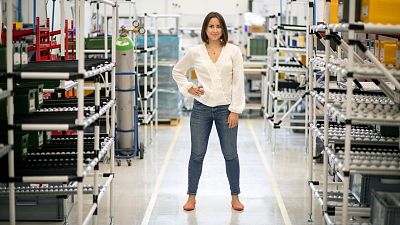 Emission-free hydrogen could, one day, entirely replace fossil fuels - and a start up in Germany believes it has the key ingredient to make it accessible to all.

"I wanted to replace all the diesel generators in New Caledonia and all the remote areas that didn't need to rely on dirty diesel, " she says.

"But then realising the potential for green hydrogen to replace fossil fuels, I wanted to be part of this change."

Green solutions will only be adopted if they are the most economically attractive. And that's our mission at an after to make green hydrogen cost-competitive with fossil fuels.

With headquarters in Germany, the company has deployed its ion exchange membrane electrolysers in over 100 projects across 33 countries. The technology turns renewable electricity into emission-free hydrogen gas.

What is green hydrogen?

Much of the planet's hydrogen is locked up in water. So-called 'green' hydrogen is an emission-free way of extracting it. This extraction relies on renewable energy, which is used to power electrolysis. Electrolysis is the chemical process needed to separate the hydrogen and oxygen atoms in the water.

Extracting hydrogen this way has been facing criticism, because of its low efficiency and high cost. Enapter says, however, that their AEM Electrolyser solves these problems and provides a quick and easy way to produce green energy, even at home.

Enapter says its electrolyser uses about 2.4 litres of water to generate enough hydrogen for a couple's home for several days.

However, the exact number of days depends on the power storage capacity. This amount of water is equal to half of the water used for flushing a toilet once (5 litres), and eight times less than the water consumption of a dishwasher (20 litres).

The Earthshot Prize will help Enapter to start mass production.

"The production site, we started to build six weeks ago, will go into mass production at the beginning of 2023", says Vaitea.