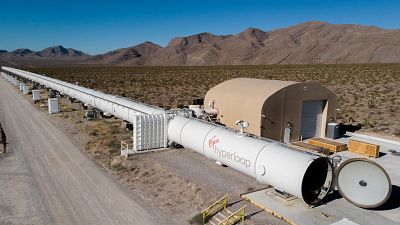 Virgin Hyperloop's test site in Nevada, USA.   -   Copyright  Sarah Lawson Virgin Hyperloop
The opinions expressed in this article are those of the author and do not represent in any way the editorial position of Euronews.
By Josh Giegel  •  Updated: 15/02/2022

The clock is ticking, and delays in finding a solution to curb greenhouse gas emissions put the fate of future generations in a precarious position.

The European Union understands this, leading the global fight against climate change. Its objective to reach climate neutrality by 2050 will require aggressive measures: “at least” 30 million zero-emission cars on European roads by 2030, double the high-speed rail service by 2030 (triple by 2050), and zero-emissions ships and aircraft to be market-ready by 2030 and 2035, respectively.

While there is progress, we need more. For example, while the recent short-haul flight ban in France has its merits, replacing plane routes of 500km or less with rail would reduce emissions emitted by aviation by only 3.8 per cent. In addition, moving air traffic to rail will likely lead to constraints on the railway infrastructure, leading to demand for new traditional rail and high-speed rail lines.

Faced with these demands, the question is whether we should continue investing in the technology of the 19th century, or a new one.

Time must also be a consideration. Neither EVs nor rail can compete with aviation when time is of the essence for passengers.

I believe that missing link is hyperloop. This new technology gives us the power to create a higher-performing mass mobility system. By combining an ultra-efficient electric motor with magnetic levitation and a low-drag environment, hyperloop can carry more people at faster speeds than any other transport, with infinitesimal greenhouse gas emissions.

More specifically, if traditional rail is ideal for traveling distances of 500 km or less, and air travel is well-suited for distances of more than 1,000 km, hyperloop easily covers trips between 500 and 1,000 km, seamlessly moving across borders on a universal system that avoids one of the pitfalls of early rail development.

As the weight of our climate crisis grows heavier each day, the time to act is now. The good news is I’ve seen a global desire for change. Nations and companies around the world are recognising the potential of this technology.

Just a few months ago, the European Commission’s Sustainable and Smart Mobility Strategy included hyperloop as a critical component of its long-term strategy to reduce transportation-related greenhouse gas emissions by 90% by 2050. A similar consensus exists in the U.S. under President Biden’s infrastructure proposal, with its emphasis on achieving the goal of zero net emissions by 2050.

The question isn't whether hyperloop is possible, it's how soon we can integrate it into our ecosystem and where. The faster we act to deploy hyperloop and other forms of clean public transport, the faster we can create a sustainable and complete transport ecosystem for the third millennium and beyond.

Could these self-driving vehicles change the future of transport?