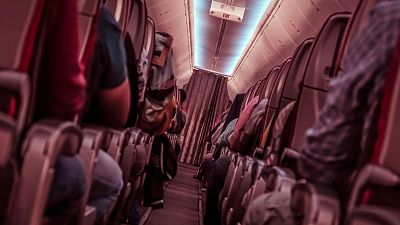 The COVID-19 pandemic has ground the aviation industry to a halt over the last year and a half.

Airline emissions were unprecedentedly low throughout this period and are only just starting to rise again as international travel resumes.

But the nature of travel is changing, and this time it’s as a result of climate change. From increased turbulence to frequent flyer taxes, what is in the store for airline passengers as the climate crisis gets worse?

Turbulence could get worse on flights

‘Head-slamming’ turbulence is steadily increasing on flights, according to the National Transportation Safety Board (NTSB) in the US.

Over 65 per cent of severe injuries logged by US accident investigators from 2017 to 2020 on planes resulted from turbulence, triggered by atmospheric conditions that could be worsening due to climate change.

Because they have to be on their feet for longer than passengers, flight attendants are the most vulnerable - in fact, they are 24 times more likely to be seriously injured.

They’ve been “slammed off ceilings, walls and floors, suffering broken vertebrae and other fractured bones as well as head injuries”, according to NTSB accident reports.

They’ve been slammed off ceilings, walls and floors, suffering broken vertebrae and other fractured bones as well as head injuries.

The problem has been exacerbated by insufficient weather reporting and outdated guidance to airlines.

You can also experience** ‘clear air turbulence’**, according to Dr. Paul Williams, a professor of atmospheric science at the University of Reading.

In 2019 Williams told CBC, “Flying through a cloud, when at least you can see it, you know it's there and you're going to expect some turbulence in the next few minutes.

“But clear air turbulence is generated by instabilities in the jet stream because of very rapidly moving air currents at 35,000 feet. The wind speed increases with altitude.”

If the wind is too strong, says Dr. Williams, then “the atmosphere just can't contain the stresses and strains. It becomes unstable and breaks down.”

“Because of our CO2 emissions, it's modifying the jet stream and just increasing those instabilities,” he concludes.

More flights could be delayed due to extreme weather

​​Imagine boarding a flight only to be told that the airline needs a dozen passengers to get off because it’s too hot outside for the plane to take off fully loaded.

This could become a common experience for passengers at the world’s 19 major airports as extreme heatwaves get worse, according to a study by Columbia University in the US.

“As air temperatures rise at constant pressure, air density declines, resulting in less lift generation by an aircraft wing at a given airspeed and potentially imposing a weight restriction on departing aircraft,” the study details.

And it’s not just the heat that is starting to cause delays - storms and extreme weather are also a problem. Just this month, one airline passenger wrote about her experience of violent storms in Texas.

People had waited in American Airlines queues for hours trying to get rebooked on a different flight, or to get a refund.

“Uncharacteristic tornadoes and severe thunderstorms had wracked the northern part of the state, grounding hundreds of planes and causing hundreds of others to be diverted,” writes Elizabeth Blackstock in transport publication Jalopnik.

“People had waited in American Airlines queues for hours trying to get rebooked on a different flight, or to get a refund, or to be directed to a hotel, or to just get a coupon for a compensated snack.”

There has been a surge in wildfires all across the world in recent months, from Greece, Turkey and Italy, to California and Canada. As a result, airports are cancelling flights and shutting airports to control the blazes.

In July, Sicily’s main airport closed because of forest fires, leaving hundreds of tourists stranded. Planes couldn’t take off or land due to the raging fires.

Then in August of this year, Kelowna International Airport in Canada implemented a ‘no-fly zone’ due to the White Rock Lake wildfires. At least 40 flights were cancelled over 24 hours.

“The White Rock Lake fire boundary has moved east to Lake Okanagan with a no-fly zone up to 10,000 feet above sea level - this is affecting approaches into the airport,” said Phillip Elchitz, senior airport operations manager at the BC Wildfire Service.

Wildfires in the vicinity of #YLW, visibility & wind are causing flight delays and/or cancellations. Please continue to check with your airlines for the most up to date flight information. We understand the inconvenience to travellers and appreciate everyone’s patience.

Flights have also been delayed and cancelled at another airport in Canada this week.

Passengers at Nanaimo Airport were left disappointed as Transport Canada closed its airspace from dawn to dusk due to the 70-hectare Mount Hayes wildfire.

And in Bolivia, firefighters are battling a wildfire near Viru Viru International Airport in Santa Cruz de la Sierra. Some flights have been delayed or cancelled and the main access road to the airport has been closed, with traffic being directed to alternative routes.

There could be climate taxes on flying

A frequent flyer tax is being touted as one of the air travel industry’s only solutions for meeting Europe's climate targets.

Environmental campaign group Greenpeace has long-supported the implementation of a “frequent flyer levy” - a tax that seeks to weed out unnecessary travel undertaken by the privileged few.

If this policy took shape, it could stop the aviation industry from becoming the world’s biggest source of carbon emissions by 2050.

But how would it work? Each year, every person would be given a tax-free return flight, with the levy kicking in at a low rate and rising in increments for every extra flight.

The money collected from this would then be put towards environmental initiatives to offset the impact of the remaining flights.

Another proposal is that we start taxing airlines themselves. Currently, international flights in Europe are not subject to VAT and airlines pay no tax on their kerosene.

Taxing airlines could raise €3.7 billion a year and help prevent a return to pollution growth.

Taxing airlines could raise €3.7 billion a year and help prevent a return to pollution growth, according to Transport & Environment (T&E).

“While European governments are pumping unprecedented amounts of money into recovery packages, ending aviation’s tax exemption will open a much needed revenue stream.”