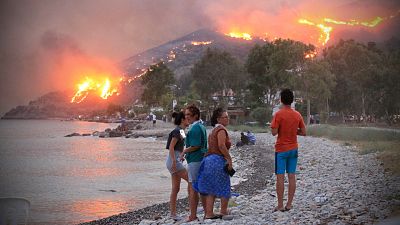 People on a beach watch the blazes spreading up a hill in the Aegean coast city of Oren, near Milas, in the holiday region of Mugla.   -   Copyright  STR/AFP
By Rosie Frost  •  Updated: 04/08/2021

The worst heatwave in decades has seen people across southern Europe face the consequences of extreme weather.

For Turkey, the effects have been devastating with extreme heat turning the region into a tinderbox. In the space of just six days, the country’s forestry directorate reported more than 130 fires across dozens of towns and cities.

So far eight people have been killed and more than 10,000 have been evacuated from Mugla province alone. On Monday, a record increase in electricity consumption due to heat led to blackouts in major cities such as Ankara and Istanbul.

The fires are so large that images from Copernicus, the EU’s Earth observation programme, show that smoke had crossed the Mediterranian and reached Egypt.

Severe #wildfires?continue in #Turkey fueled by a severe #heatwave#EUCivPro#RescEU has been activated

This @CopernicusEU#Sentinel3 ???️image acquired on 1 August shows that the smoke cloud has crossed the Mediterranean and reached Egypt? pic.twitter.com/lvfsHzMMwJ

“We are going through days when the heat is above 40C, where the winds are strong and humidity is extremely low,” he added, “we are struggling under such difficult conditions.

Is Turkey underprepared for ‘fire season’?

After disclosing that it no longer had firefighting planes at its disposal, the Turkish government has come under criticism from opposition leaders and citizens on social media for its response. Statements from ministers say that the aircraft were poorly maintained and unfit for service.

Waterbombers (aircraft that drop water to help fight fires) have been mobilised from Russia, Azerbaijan, Iran, and Ukraine. The European Union has pledged to help but it also has member states across the Mediterranean battling blazes of their own.

Authorities are investigating the cause of the fires including human “carelessness” and possible sabotage by Kurdish militants. Experts, however, most point to the effects of climate change fanning the flames.

Authorities are investigating the cause of the fires including human “carelessness” and possible sabotage by Kurdish militants.

Hediye Gundiz, head of environmental group Platform A, told Al Jazeera the government had been warned 15 years ago that global warming was likely to cause more fires in Turkey - but nothing was done.

“It takes one tree between 30 and 40 years to grow. It could take 50 years to recover what we had, but we don’t have the water we need for it like we used to,” she said.

The consequences of climate change

A ‘heat dome’, an area of high pressure that acts like a lid on a saucepan, is to blame for the record temperatures. A mass of hot air gets trapped under this lid leading to sweltering temperatures.

They are relatively common in temperate zones like the Mediterranean but are getting more intense and regular in areas where they don’t normally form. The main trigger, according to scientists from the US National Oceanic and Atmospheric Administration (NOAA), was a strong change in ocean temperatures last winter.

Having shallow waters and being semi-enclosed means that the Mediterranean has warmed faster than any of the world’s oceans. It has increased by up to 0.4 degrees Celsius per decade compared to a 0.2 degree rise globally. The region is a hotspot for the effects of the climate crisis.

Even before the fires, Turkey was struggling to cope with the consequences. In May, a lake in the country’s Van province dried up, six people were killed in flash floods in the Anatolia region last week and hundreds of flamingos were found dead as their watering holes disappeared.

Warmer waters were partly to blame for a thick layer of sea snot that engulfed boats moored in the Sea of Marmara last month, too. After both wildlife and tourists were impacted, Turkish President Recep Tayyip Erdogan acknowledged that climate change had played a part in the increase in ocean temperatures.

**Watch the video for more on the wildfires in Turkey. **