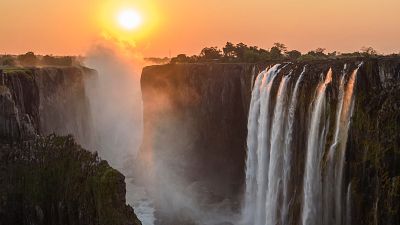 The beautiful Victoria Falls in Zimbabwe, a cornerstone of the country's tourism sector.   -   Copyright  Sammy Wong / Unsplash
By Euronews Travel  with AP  •  Updated: 10/08/2021

Zimbabwe's Victoria Falls usually teems with tourists who come to marvel at the roaring Zambezi River as it tumbles down more than 100 metres to the gorge below, sending up a mist that is visible from miles away.

'The Smoke That Thunders' - the English translation of what the waterfall is called in the Sotho language - is still mighty, but the COVID-19 pandemic has reduced visitors to a trickle. Ordinarily, Victoria Falls attracts 350,000 tourists a year, but their numbers have dropped to almost none as a result of travel restrictions.

Hotel occupancy rates fell into the single digits during 2020 and the first half of 2021, and some hotels were forced to close, according to the Hospitality Association of Zimbabwe.

To promote Victoria Falls as a safe destination, President Emmerson Mnangagwa's government has made vaccines available to all 35,000 residents of the town that shares a name with the waterfall. An estimated 60 per cent of the people there have been vaccinated with either the Sinopharm or Sinovac vaccines, both from China.

Although tourists have not returned in large numbers, Victoria Falls mostly has been spared the current wave of COVID-19 that has swept across the rest of Zimbabwe and southern Africa, which health officials attribute to the town's relatively high level of vaccinations.

Nationwide, over 1.8 million people, slightly more than 12 per cent of Zimbabwe’s population, have received the first dose, while more than 900,000 people are fully vaccinated with two doses.

On the strength of the vaccination rate in Victoria Falls, the government last week reopened two land borders that link the town to the neighbouring countries of Zambia, Namibia and Botswana. Travellers with proof of vaccination and a negative COVID-19 test will be permitted entry.

Where COVID-19 was first recorded in the country

Victoria Falls was where Zimbabwe recorded its first COVID-19 case in March 2020, likely because of its high number of international visitors. A year later, at a time where only medical workers and other essential workers were eligible for vaccines, shots were made available for all of the town's residents age 18 and older.

All adult Zimbabweans are now eligible, but because of widespread supply shortages, the lines for jabs are long and many people are disappointed.

Restaurants in Victoria Falls are allowed to serve sit-in customers – something that is forbidden in the rest of Zimbabwe, which still has tight restrictions as a result of the current surge driven by the delta variant of the coronavirus. Close to 90% of COVID-19 hospitalizations and deaths in the current surge are of unvaccinated people, according to a recent report by the Ministry of Health.

Although planeloads of tourists have not yet returned, the reopening of Victoria Falls was a relief for a town that survives on tourism, Anald Musonza, the regional chairman of the Hospitality Association of Zimbabwe, told The Associated Press.

“We had been waiting for this for a long time," Musonza said. "This will help us retain some jobs that were lost due to the pandemic.”

Tourism, together with mining and agriculture, is a key anchor of Zimbabwe’s fragile economy.

Mass vaccinations could help open up tourist destinations countrywide, said Tinashe Farawo, a spokesperson for the Zimbabwe National Parks and Wildlife Management Authority. The loss of tourism revenue has hurt the authority's ability to operate.

“Victoria Falls is testimony to what vaccines can do," he said. "It’s good for us. It’s good for wildlife because now we can raise money to deploy our rangers and fund other critical operations.”