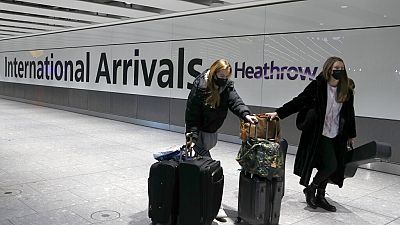 The UK has announced that fully-vaccinated travellers arriving from Europe and the US will no longer have to quarantine on arrival in England — except for those arriving from France**.** The new rule kicks in next Monday, August 2.

Grant Shapps, the Secretary of State for Transport confirmed the move on Twitter on Wednesday afternoon.

The Department for Transport provided further details in a statement issued later on Wednesday.

"Passengers arriving from amber countries who have been fully vaccinated in Europe (EU Member States, European Free Trade Association countries and the European microstate countries of Andorra, Monaco and Vatican City) and the USA will not have to quarantine when entering England," the statement read.

"Separate rules will continue to apply for those arriving from France," the Department for Transport added.

"Anyone arriving from France to England must continue to quarantine for 10 days, at home or in other accommodation, even if they are fully vaccinated against COVID-19."

The British government has said in the past that the measure was because of the prevalence of the Beta variant in France, even though the rate has been falling in recent days.

The rules have been announced for England, but the devolved nations are expected to follow suit and update their rules imminently.

The change is in addition to the UK's existing traffic light system which determines travel restrictions based on whether a country is classed as red, amber or green.

Currently the majority of countries - such as the US and many European countries including Spain, Italy and Germany - are on the UK’s amber list. It was announced a couple of weeks ago that fully vaccinated UK citizens returning from amber countries would no longer have to self-isolate, except those coming from France.

What will the procedure be for those vaccinated travellers?

British authorities say fully vaccinated travellers from amber countries in Europe and in the US will still need to "complete a pre-departure test before arrival into England, alongside a PCR test on or before day 2 after arrival."

"Passengers from all countries cannot travel to the UK unless they have completed a Passenger Locator Form," the Department for Transport added.

British authorities also gave their go-ahead on Wednesday for international cruise sailings to restart from England.

"International cruise travel advice will be amended to encourage travellers to understand the risks associated with cruise travel and take personal responsibility for their own safety abroad," the Department for Transport said.

If I travel through France to reach another country do I have to quarantine?

As it stands, anyone who has been in France in the previous 10 days will need to quarantine on arrival to England. They will also need a day two and day eight PCR test, regardless of their vaccination status.

Eurostar has confirmed that while both their Brussels - London and Amsterdam - London routes do stop in Lille, France, passengers from either of these cities travelling directly to London will be segregated in carriages so there is no need for quarantine despite this stop-off.

Who will benefit from the updated rules?

The change will be welcome news to the millions of UK citizens living abroad who have not been able to visit loved ones in the UK without quarantining.

Tourists and business travellers who want to visit the UK will also benefit, though they may find it difficult to find accommodation.

“By reopening quarantine-free travel for travellers who have been fully vaccinated in European countries and the USA, we’re taking another step on the road to normality which will reunite friends and families and give UK businesses a boost,” said Health Secretary Sajid Javid.

What are the UK's travel restrictions?

Up to now, all UK arrivals needed to show a negative PCR test, fill in a passenger locator form and quarantine for 10 days, or 5 days if they tested negative on day 5.

The UK’s traffic light system has been heavily criticised by the travel industry, with some saying the country has fallen behind the rest of Europe in opening up. Research from the World Travel and Tourism Council suggests the UK economy is losing £639 million (€750 million) a day due to the lack of inbound tourism.

What about the Delta variant?

In the past few months, the UK has become something of a hotbed for the Delta variant that has rapidly spread throughout Europe. On this basis, even with the rule change, US authorities are advising against travel to the UK and the country’s borders remain closed to UK arrivals.

However, the UK does have one of the highest vaccination rates of any country in the world. So although Delta cases are high, hospitalisations and deaths are starting to stabilise.

As for the rest of the world, the rules continue to change frequently. For example, Australia is on the UK’s green list but its borders remain closed. Hong Kong and Singapore, too, are on the green list, meaning inbound passengers to the UK need not quarantine regardless of vaccination status.

Amber-listed countries must currently undergo testing and a 10-day quarantine upon arrival to the UK. This includes Canada, China, Japan and Russia alongside the majority of European countries.

Meanwhile, travellers from red list countries are only able to enter the UK if they are a British or Irish National or resident.

You can find out more on the UK government website.