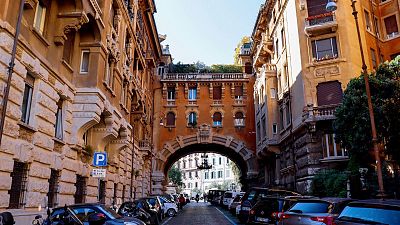 All across Europe, football teams are battling it out in the hopes of winning the long-awaited European Championship. Matches are taking place across an array of cities, from the bustling streets of Amsterdam to the futuristic architecture of Baku, Azerbaijan.

However, if you look beyond the stadiums and cheering crowds, there are a myriad of landmarks outside the typical tourist itinerary.

Rome is home to some of the best-preserved history in the world, as well as a reputation for delectable food. However, much of Rome’s beauty lies in its subtle and often unnoticed neighbourhoods.

This is certainly the case with Quartiere Coppede, Rome’s smallest neighbourhood that is packed full of charm. The area is home to various iconic examples of Italian architecture, combining a playful mix of styles including Roman Baroque, Ancient Greek, Medieval and Art Nouveau. It makes it the ultimate stop for all things architecture.

A staple when it comes to exploring Scotland’s rich history, the country’s second city doubles up as a centre for entertainment. It has a thriving music scene and a whole host of museums and cultural institutions to explore.

For visitors looking to escape the hustle and bustle of inner city life, solace can be found in Kibble Palace. Situated in Glasgow’s Botanical Gardens, it is a striking feat of engineering, incorporating marble, glass and steel to create an oasis of calm and tranquility.

Often referred to as ‘the Paris of the East’, Bucharest seamlessly blends the old with the new. Visitors can find various hidden gems spanning neighbourhoods which vary in age.

One unmissable spot that can be found in the city’s Old Town is the Carturesti Carusel, a truly stunning book shop that will have any keen reader hidden between the shelves for hours at a time.

Renowned as one of the most beautiful cities in Europe - despite fierce competition - Budapest enjoys its status as an architectural and historical marvel.

In fact, Budapest’s awareness of its own spectacular architecture is reflected in one of its hidden landmarks, Vajdahunyad Castle. Throughout its construction in the early 1900s, the castle was split into four parts, each designed in different styles. There’s even miniature replicas of other famous Hungarian buildings and landmarks hidden around the castle.

Known as one of the happiest cities in Europe, there’s plenty to smile about in Copenhagen. From its colourful houses to its complex canal systems, visitors won’t find themselves stuck for things to do.

If you’re looking for something a little more unusual than the classic tourist sites, look no further than Superkilen Park. Designed to celebrate multiculturalism, this public park is a joyful homage to the diverse communities of Copenhagen. It brings together art styles and installations from across the world, creating a vibrant public space for all to enjoy.

Due to its location between the Black and Caspian seas, Azerbaijan has been influenced by Europe, the Middle East and Russia. Baku is at the intersection of so many historical moments which are represented in its architecture.

Along with impressive buildings such as the Palace of The Shirvanshahs and the Socar Tower, the city is also home to its very own natural wonder. Just south of the city is the Baku Archipelago, home to over 300 Mud Volcanoes dotted around the Caspian Sea. This unmissable phenomenon is just a short distance from the city centre, with regular coaches and tours heading out from Baku daily.

When visiting London, you are met by a whole host of well-visited attractions, ranging from Buckingham Palace to the London Eye.

However, if you’re looking for something quintessentially British that gets you away from the crowds, the Wallace Collection should be your next stop.

Displayed at Hertford House, a stunning townhouse dating back to the 16th century, it houses some of the most iconic art collections in Europe but is often overlooked by passing visitors.

As the Bavarian capital, Munich is best-known for Oktoberfest, Germany’s famed annual beer festival. Beyond its reputation for beer-drinking, Munich has a diverse nightlife scene, with the Drehleier Theater adding a little glamour to an evening in the city. Hosting a range of entertainment from comedy to cabaret, the Drehleier is an unmissable night out.

Famed for bicycles and long, flowing canals, Amsterdam is rich in aesthetic streets and historically significant sites. Although great masterpieces and renaissance artworks are spread across the city in the Rijksmuseum and the Van Gogh Museum, an era of history that is often overlooked is the Dutch Resistance Movement during the German Occupation.

The Dutch Resistance Museum works to unearth the hidden narratives of resistance fighters, taking visitors on an emotional and informative journey through Amsterdam’s legacy.

Russia’s gateway to the west, Saint Petersburg is a cosmopolitan city binding together Russian culture with influences from wider Europe. Although many Imperial palaces and galleries remain, there are some other unique ways that visitors can experience Russian history and culture.

A perfect example is the Art Hotel Rachmaninov, the childhood home of famed Russian composer Sergei Rachmaninov transformed into an artistic treasure trove, with artworks by local Russian artists framed along the walls of the hotels. What better way to tour the art of Saint Petersburg than to sleep right next to it?

Located south of the Andalusia region of Spain, Seville is known for its great tapas, flamenco and incredibly hot summers. With this in mind, a great place to cool off after a long day of absorbing the Spanish sun is beside the Guadalquivir River.

Frequented by locals as a spot to sip Sangria in the evenings, the river is perfect for a quiet moment at the end of a long day, or for a nighttime stroll along the riverbanks.

Take part in our questionnaire

We want to hear how travel has changed for you since the COVID-19 pandemic.

Our questionnaire asks about your travel habits in the past - and your plans for the future. We cover everything from your favourite destinations to the importance of testing and vaccines, the type of holiday you enjoy and where you would like to go next.

Euronews readers on how the pandemic has changed their travel habits

How to reduce the environmental impact of your summer holiday