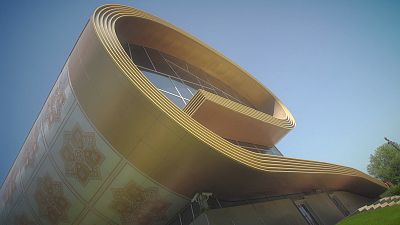 When Azerbaijan’s carpet museum opened in Baku in 1967 it was the world’s first museum of its kind and and now, fifty years later, it has become a great repository of Azerbaijani culture.

Carpets are found in almost every home in Azerbaijan were they adorn walls, sofas, beds and even tables and chairs. And, of course, floors.

So integral are carpets to the culture of the Caucasus nation that in 2010 UNESCO, the cultural arm of the UN, recognised Azerbaijan’s carpet weaving as part of humanity’s common cultural heritage.

“Azerbaijan was famous for its carpets for centuries long before it became famous for its oil,” Firahnaz Musayeva, the head of the museum’s internal relations and innovation department told Euronews.

And the tradition goes on. Contemporary carpets depict Azerbaijan’s oil wealth and are more like paintings, drawing inspiration from famous monuments, such as the Eiffel Tower in Paris, and even space.

#Azerbaijan The land of fire also in #carpet. #Oil is linked to the #history & #art of this country pic.twitter.com/w874NHtjVn