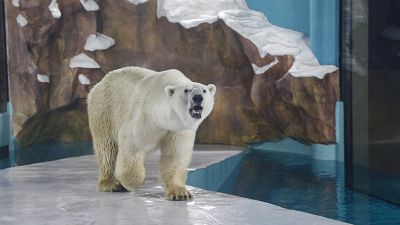 In northeastern China, a hotel built around a central polar bear enclosure - designed for the non-stop viewing pleasure of guests - has been condemned by conservationists.

'Harbin Polar Land' offers hotel bedrooms with a view across the polar bears’ pen, with the experience being marketed as 'having the bears as neighbours for 24 hours a day'.

Animal rights organisations reacted with outrage, urging customers to stay away from establishments profiting "from animals' misery". The enclosure features harsh warm lights, and a space consisting of fake rocks, icicles and a white painted floor.

"Polar bears belong in the Arctic, not in zoos or glass boxes in aquariums – and certainly not in hotels," said PETA Asia's Vice President Jason Baker.

This view is expanded upon by Nirali Shah, Senior Campaigner at PETA Asia, who explains,"These animals do not cope well at all in captivity whether that at a zoo, aquarium or a hotel like this.

“In the wild these animals are very active, they are active up to 18 hours a day, they roam thousands of square kilometres, but in captivity they are confined to tiny enclosures that are a millionth of the size they need.”

Harbin is famous for its ice-carving festival, and the hotel itself resembles a giant igloo, with its roof topped by artificial ice. But some Chinese social media users expressed unease at the theme being taken to this extreme. "A panoramic prison for polar bears... haven't we learned anything about animal cruelty?" one commentator said.

"Sadly this artificial environment is extremely detrimental to these polar bears' health and wellbeing, because it’s the complete opposite of what they have in the wild,” Nirali continues, “And it is so sad and frustrating that this hotel thinks that by keeping polar bears captive they will drive in large profits, but in reality more people are realising that animals are not ours to be used for entertainment."

Chinese authorities recently changed the law to ban the consumption of wildlife for food, after speculation over the origins of the coronavirus nudged investigators towards a Wuhan market selling animals.

But the use of parts of endangered species in traditional medicine remains rampant, and Chinese circuses and zoos are often criticised for poor standards in animal housing and care.

Find out more by pressing play on the video above.

Mayor promises a greener future for the ancient city of Athens