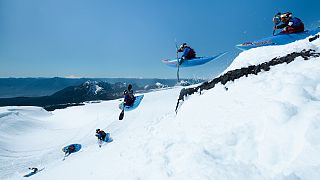 Last September, Spanish athlete Aniol Serrasolses travelled at nearly 100km/h down a snowy mountain descent in his kayak for 25 kilometres, ending the run by flipping off a waterfall. The run down Chile’s Villarrica volcano was an incredible blend of snow and water sports, in partnership with Red Bull.

Serrasolses performed tricks and jumps off rocks along the snowy descent at high speed, before cutting through the forest floor and ending in the river below. Once in the water, he performed a world first double kickflip off a waterfall before ending up in the open water totally unscathed.

Not all of his tricks went entirely to plan. In a trial run, he hit a bump and flew through the air for 10 metres before landing flat on his face. But the main event went more smoothly.

“I’ve always wanted to kayak down the snow and unite the four elements: earth, air, water and fire,” Serrasolses explains. “Taking advantage of the great winter that Chile experienced in 2020 and the difficulties to travel due to the situation we live in, I decided that this was the year to develop the project.”

The descent took place last September, the start of the Chilean spring, when the snow is still on the ground for the most part and the rivers are flowing well.

“It was pretty fun,” he continues. “The part on the snow was kind of the hardest part as a kayak is not really made for the snow so you ride it like a sled. You go really fast but you’re kind of out of control.”

“Over the last few years my focus has been a lot on the progression of the sport: the hardest waterfalls, the biggest water rivers, the highest waters. As I’m getting older, I want to do more creative stuff and more shooting and projects to put kayaking in really cool locations, where it hasn’t been seen as much.”