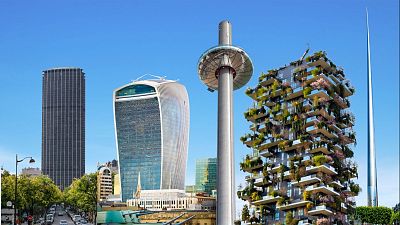 Have you ever heard of 432 Park Avenue? It’s an 85-storey skyscraper on New York’s infamous Billionaires’ Row. The third-tallest residential building in the world, apartments here have sold for over €70 million - but the critical reception has been luke-warm at best.

I remember seeing it myself in September 2015, shortly after it was built, while working in Manhattan. It struck me at the time as a somewhat peculiar design, both too thin and too tall at the same time. Architecture critics have referred to it as “stacked cubbyhole units”, and been divided on its appeal as well.

More recently, however, a TikTok account has emerged dedicated to one Vancouver teen’s deep-seated hatred of this building.

432 Park Avenue prompted an interesting discussion within our team here at Euronews Travel about the buildings we individually detest. And so we decided to open this vitally important question up to our readers.

On our Instagram account, we asked you to tell us about the monuments, buildings and developments in Europe you truly hate.

It’s safe to say, the floodgates were truly opened, and we have been inundated with brilliant - and often controversial - suggestions.

Here are some of our readers’ top nominations from (mostly) within Europe:

We asked for controversial opinions - and we certainly received them.

Don't tell our friends at Euronews Living, but we had a few nominations for that team's beloved Bosco Verticale (which means vertical forest).

"It's just so out of place and garish," writes one of our followers.

"Sure it photographs well, but it's also kind of bleak at times," adds another.

Although it's a stunning example of biophilic architecture, and we'd possibly argue not an eyesore in the conventional sense, Bosco Verticale has been surprisingly controversial.

We're still a fan of the innovative design, but our audience has spoken!

When we saw the words 'confluence' and 'Lyon' together, we were slightly worried that our followers were submitting a different, but still striking, building on the banks of the Saône. Fortunately, it wasn't our beloved green HQ that our audience submitted, but the Musée des Confluences instead.

This futuristic science museum is built in the style of deconstructivism and is meant to resemble a floating cloud.

While we're quite fond of this particular building, we can understand why it isn't to everyone's taste - especially in a city as historic and beautiful as Lyon.

This coastal observation tower has certainly stirred up some controversy during its time. Originally intended as part of a regeneration project, next to the remains of Brighton's West Pier, the i360 is a 162-metre tower, with views of Brighton, the Channel and the South Downs.

The building first sprung into public consciousness when, after private funding fell through, the local council agreed to loan millions of pounds to support the tower's creation.

Although some residents are quite fond of the building, now five years on from its completion, nearly 1,500 people campaigned against its construction. One local campaigner even dubbed it a "horrendous thing in the sky".

Much like one of our top-three eyesores (keep reading to find out which), this building was constructed in conjunction with a European Capital of Culture title.

After Porto was given the honour in 2001, Casa da Música was built as Portugal's first-ever building to be exclusively dedicated to music.

This building was submitted by a few of our readers, but one did caveat their submission by saying "many people hate Casa da Música in Porto, but to be honest - I kind of like it!" High praise indeed.

We will say that the inside is particularly cool, layered with interesting textures and patterns - including traditional azulejo tiles.

This is a bit of a cheeky one to include, seeing as the W Hotel isn't officially complete at this stage - but after multiple followers submitted it to us, we felt compelled to include it in the list.

Tucked into Edinburgh's St James Quarter, this new building is apparently supposed to look like it has been wrapped with ribbons.

Locals have less favourable comparisons, however, suggesting it looks like "a melting walnut whip" or "a physical representation of the poop emoji." Take your pick of questionable design inspiration.

At nearly 140 metres tall, the Biltmore Hotel was the tallest building in Georgia's capital city, until its crown was taken last year by Axis Towers.

Built on the site of the 1930s IMELI building, the glass tower is the first Biltmore outside of the US.

Although it's a fairly chic design, our readers described both as "looking like nothing" and being "too much for the area."

5. The Spire of Dublin

This Irish spire received a few nominations from our audience, which is why it appears fairly high on our list.

Completed in 2003, the Spire of Dublin was chosen from a number of design suggestions as part of a regeneration project in the city.

Though some residents are quite fond of the 120-metre tall monument, others are less keen. It's been given a selection of less-than-flattering nicknames, including "the stiletto in the ghetto" and "the spike".

20 Fenchurch Street, AKA the Walkie-Talkie, is certainly a controversial building in London. It was completed in 2014, and has been the subject of much discussion and derision since then.

It was awarded the Carbuncle Cup in 2015, a prize given to the ugliest building completed within the last 12 months in the UK.

But the Walkie-Talkie deserves a place in our list, not just because it gives one of our followers "a seriously bad vibe", but because it was designed by Rafael Viñoly - who is also known for his work on the aforementioned 432 Park Avenue.

As another reader reminded us, the Walkie-Talkie may give off 'bad vibes' because it sprung to notoriety for melting cars parked on the road below. The UK media dubbed the infamous building the 'Walkie-Scorchie' and the 'Fryscraper' shortly after.

This reflective issue found in another of Viñoly's buildings in Las Vegas, caused by the angle of the glass when the sun hit it. Spot temperatures of 91°C and 117°C were recorded in London, caused by the building.

Although the architect attempted to blame global warming for this heating problem, he did later concede that there were "a lot of mistakes". Non-reflective film has since been added to the windows to prevent future vehicle death-rays.

We're going to take a brief pause before we crack into the top 3.

Although it's not technically in Europe, we couldn't ignore the Milad Tower as so many people submitted it to us.

"It's an irrelevant, huge, concrete structure," writes one audience member, while others argue that it is "just so sharp!"

It might be that the stunning mountains in the backdrop of every photo are just too distractingly beautiful, but it's not a building that obviously screams eyesore.

But the cries from our readers were too overwhelming not to include it in the list as an honourable mention.

The Kunsthaus Graz was submitted to us by a few particularly impassioned readers. "I nearly puked getting off the bus and seeing this," recalls one follower.

Simultaneously referred to as the 'Friendly Alien' and the 'Black Tumour' by local residents, it's certainly a design that has split opinions.

Kunsthaus Graz was built to celebrate the city's role as European Capital of Culture in 2003, and still serves as Graz's contemporary art museum.

We were somewhat torn on where this building should appear in the list, as it is a great example of 'blobitecture' - but we will concede that from some angles it really could look like a tumour.

Although La Pirámide could be argued to be 'characterful' or 'uniquely charming', it looks like someone sliced up a piece of brutalist architecture with a blunt knife.

For a city known for its stunning medieval castle and delightful coloured houses, La Pirámide almost feels like an affront to Alicante and all its beauty.

The 210-metre tower, jutting out over Montparnasse in Paris, was far and away the most suggested building from our readers.

So incensed were our followers, that we received triple the submissions for Tour Montparnasse than the next most popular suggestion in Europe.

"It's just a massive, brownish rectangle," argues one reader, "it's hated by e.v.e.r.y Parisian."

Another adds, "it's just so out of place!"

However, a few of you did concede that the brown tower, despite its obvious lack of aesthetic appeal, does have some of the best views in Paris. I would argue that these views are heightened by the fact that the Tour Montparnasse can no longer be seen.

Do you agree with our list? Let us know by joining in the conversation on Twitter using @euronewstravel.