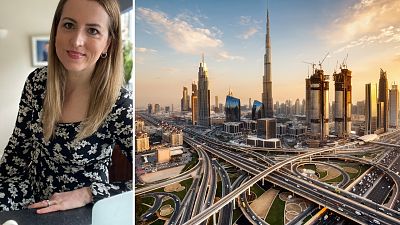 When I first returned to live in the UK after almost a decade spent as an expat in the Middle East, everything felt familiar, yet strange.

My reality was the tall, shiny buildings on Sheikh Zayed Road, the large suburban villas, palm trees and the sight of distant sand dunes. My norm was the smell of Oud in the air, the sound of the mosque's call to prayer and the dry, sometimes overwhelming heat of the Arabian Gulf on my skin.

In the small village we moved to in Berkshire, the brick buildings looked tiny, the grass and trees appeared so green and smelt so earthy. The clouds were fluffy and low in the sky and the air, breezy and crisp on my skin. I felt detached, like an alien or as if I was in a dream.

It was in 2010 that I resigned from my job as a reporter at a newspaper in the UK. In my 20s, newly pregnant with my first son and about to embark on an adventure on the other side of the world, my husband and I left with little more than a suitcase, returning years later with three children in tow and a 60ft shipping container full of possessions.

What I stood at the departure gate at Heathrow Airport a decade ago, nauseous with morning sickness and nerves, I could never have imagined what life had in store for me. The joy the expat life would bring. The desert memories cherished forever. And then how very tough it would be to leave it all behind.

Life as an ex-expat

Two years on and now loving my UK life, I realise that those first few months I was experiencing the phenomenon of ‘reverse culture shock’.

I read up on the little-known topic and discovered that experts say that like expatriation, repatriation has its psychological phases, almost like a grieving process, that come as a surprise. It certainly did for me.

It’s not just feelings of loneliness and homesickness for your foreign experiences that cause a disassociation with ‘home’, it’s the daily practices of your home country that you become out of touch with.

Ex-expat social media sites are full of familiar stories. An Oman expat confesses that when she returned to live in Preston, she turned to alcohol - not available in the Middle East without a licence - as a coping mechanism, and then went teetotal to save her marriage.

Another mum-of-two who relocated to Berkshire after living in Bolivia, in South America, could hardly bear how locals appeared to take their privileged life for granted, when she’d seen such painful poverty.

One woman describes the embarrassment of not knowing how to use a chip and pin machine when she first returned to the UK. Card payments still involved a signature when she lived abroad.

Others would sit in their cars at a petrol station momentarily waiting for a member of staff to refuel for them. Then remember they had to do it themselves.

Coming from an Arabic country, I was initially shocked to see people wearing shorts and T-shirts in supermarkets when I had become accustomed to modest dress.

Then there’s the obvious differences such as the weather, driving on the opposite side of the road, having so much choice in supermarkets, and the convenience of online shopping that we never had overseas.

Robin Pascoe, the author of the book ‘Homeward Bound’, compares returning home to wearing contact lenses in the wrong eyes. “Everything looks almost right,” she says.

What are the symptoms of reverse culture shock?

Expatica, an online information portal for English-speaking expats, says: “Being an expat is such a lengthy and deep international experience. You see old norms and values from your home country from a fresh perspective, and expats see things in a new light - something like Dorothy going from black and white to technicolour.”

According to the University Studies Abroad Consortium symptoms of reverse culture shock can include frustration, boredom, restlessness, changes in goals and priorities, depression and negative feelings towards your home country.

How to deal with it

Life coach Aryssa Amin, of Ryssdom Coaching, herself a Brit based in the United Arab Emirates, says the key to any relocation is being conscious of the fact that “you are not only relocating physically but also relocating mentally”.

“We invest a lot of time and effort in coordinating the logistics that we don’t give ourselves the permission to prepare emotionally for the transition,” explains Aryssa.

“If we carry expectations of replicating the life which we already have, we open doors for disappointment and shock.

“Prepare for the move by building connections at your new location. Engage with the local community through Facebook pages or other social media platforms. Work on building a new life which you desire with likeminded people.

“Making connections will encourage you to move forward rather than looking back. Creating a new life is an opportunity for growth.”

Although it may take time, expats do gradually adjust back to feeling comfortable with their new life - this can take anywhere from a few months to two years.

Throughout this process, I’ve realised that ‘home' is a malleable concept – it changes as we relocate throughout life and feels like the embrace of a loved one. It’s not a specific place - it is wherever we raise our families, make our memories and share the great moments of our life.

Unexplored Europe: A guide to the countries you might be missing