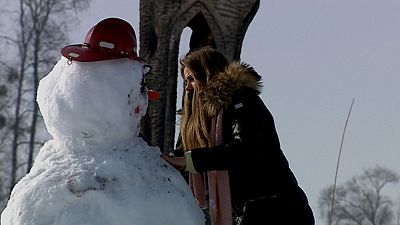 This weekend, people gathered by a frozen lake in Korycin, northeastern Poland, to build 1,000 snowmen in an effort to fundraise for 21-month-old Bartek Bojarzyński, who has a serious heart defect.

Bartek needs specialist surgery that can only be performed at a hospital in the United States, and supporters hope to raise over 150,000 euros to enable him to have the operation, scheduled for April 2.

His mother, Marzena Bojarzyńska, said she felt "great emotion" on seeing so many people turn out to help build the snowmen. The event began on Saturday and, by Sunday afternoon, hundreds of snowmen stood side by side on the beaches of the frozen lake.

Hearts and a fire engine were also built out of snow and participants said they were hopeful that the amount needed would be raised. The snowmen have made for a spectacular view, as each one erected in the snowy field is unique.

Korycin is a village located in the north east of Poland. It lies about 39 kilometres west of Sokółka - the county’s namesake - and 44 km north of the regional capital Białystok.

The rural village has a tiny population of just over 500 and is best known for its beautiful parks, including Park Kulturowy Korycin, churches and cabin architecture. It’s also home to a range of traditional Polish restaurants and bars.

Nearby Białystok sits on the banks of the Biała River and is the largest city in the area. More generally, northeastern Poland offers a wealth of outdoor activities in its beautiful surroundings, including kayaking, forest trekking and biking.

Full of history, visitors to the area can also pay a visit to sites such as Hitler’s headquarters in Wolvenshantz.

To find out more about Bartek’s story and to see the snowmen for yourself, press play.

Why is Nepal trying to ban women from travelling?