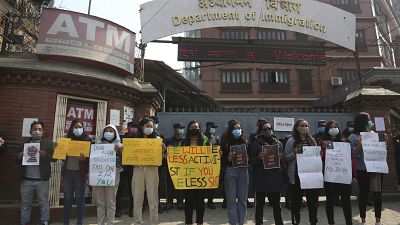 Hundreds of women in Nepal are protesting against a new travel ban.   -   Copyright  Niranjan Shrestha/AP
By Laura Sanders  •  Updated: 18/02/2021

Hundreds of women’s rights activists and their supporters have been rallying in Nepal this week against a proposed law which would stop them from leaving the country freely.

Despite Nepal receiving thousands of in-bound tourists during an average year, the law would see female travellers under the age of 40 needing permission from their families and local government to travel to countries in Africa and the Middle East.

The government says it’s to protect women from being trafficked abroad. But opponents disagree, and say that efforts should be focussed on protecting women within the borders of Nepal.

Last week hundreds of Nepali women took to the streets of Kathmandu to protest against the suggested travel ban.

As the capital of Nepal, Kathmandu is an international city. It attracts mountain climbers from all over the world who come to climb Mount Everest. And yet, as a city with such international appeal status, it's ironic that its own women feel that they’re being denied the right to explore the world freely.

The protesters marching in the heart of the city chanted slogans demanding equality. Some women were holding a mock Hindu funeral of a woman during the rally in protest against violence, rape and discriminatory laws in Nepal. Activists say even though the country’s constitution guarantees equal rights to women, much more than that needs to be done to make that a reality.

The right to protest denied

The protesters tried to march to the prime minister's office, but were blocked by riot police and barbed wire barricades. There were no clashes or violence.

Reshu Aryal, a rights activist in the rally, said she wanted to protest what she saw as police and official indifference to discrimination and sexual violence against women and girls.

"Women are increasingly being discriminated against and underage girls are getting raped and killed but the police and state are not concerned at all," she said at the rally.

"Women are increasingly being discriminated against and underage girls are getting raped and killed but the police and state are not concerned at all."

Since last week’s march, activists and their supporters have received rape and death threats online.

Does a travel ban work?

This isn’t the only attempt to restrict women’s movements abroad. In 2017, the Nepali government banned citizens from taking up domestic work in Gulf states to protect them from human trafficking and modern slavery.

But the law was viewed as exposing migrants, particularly women, to more exploitation because the government said they could still seek work in Gulf states, but they couldn’t travel to the destination country directly from Nepal. The extended journey made migrants more vulnerable to trafficking and exploitation, as they could be tricked into fake jobs or sold on.

The proposal was submitted to the Department of Immigration last week for approval. The next steps are uncertain, but given Nepal's history of imposing travel restrictions on female migrant workers, it's likely to be a question of when, rather than if, this amendment to the 2007 Foreign Employment Act will be passed.

Why are people building thousands of snowmen by a lake in Poland?