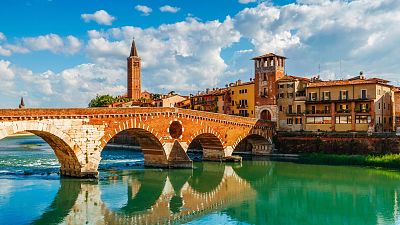 Loved-up couples take heed. If you’re looking for a romantic city break and the first place that popped into your head was Paris, you may want to think again.

While it’s true that strolling arm in arm with your partner along the river Seine is a lovely thing to do to seal your relationship status, it’s hardly original.

So, we’ve done the leg work for you to bring you six of the best romantic city breaks that will spark inspiration for Valentine’s Day or a landmark anniversary.

These are sure to make even the hardest of hearts melt come February 14th.

It’s no coincidence Verona was the setting for Shakespeare’s Romeo and Juliet, but the balcony scene is far from the only romantic area of this Italian city.

Just an hour away from the bustling canals of Venice, loved-up couples can enjoy Verona in all its glory. Explore the beautiful cobbled-stoned Piazza Bra, home to international concerts and historical exhibitions, or marvel at the sun-glazed Ponte Pietra across the river Adige.

You can show your affection by going on a shopping spree for that special love token in the city's renowned retail area Via Mazzini. It's filled with mainstream and high-fashion boutiques like Armani, Trussardi and Furla. The city even has its own Festival of Love centred around the 14th of February so a romantic weekend here will be everything but tragic.

Prague may be famed for its cheap beers and stag dos but don’t let that cast a shadow over its amorous side.

Stunning as a picture postcard, this city has no less than 100 church spires making it a romantic getaway for those who enjoy architecture. The Czech capital is an eclectic mix of Art Nouveau, Baroque, Gothic and Renaissance styles.

Walking hand-in-hand through its quaint streets over ornate bridges and through cute squares, it’s akin to a fairy tale for lovebirds. And don’t forget to pack a lock so you can head to the famous Lovers’ Bridge. This is a small but special spot where hundreds of couples have attached a padlock with a message on as a display of their enduring affection for one another.

To take the weight off your feet after all that walking, why not feel like a real-life prince and princess as you’re chauffeured around the narrow streets of Prague’s charming Old Town in an elegant horse-drawn carriage?

Need convincing? If you've seen the film Before Sunrise, you’ll already know it’s one of Europe’s most romantic cities. Like the characters in the movie, it won’t take you long to fall in love with your partner all over again. Take your pick of the many rooftop bars scattered about the city, where you can enjoy spectacular views of the skyline while sipping on a boozy cocktail.

Make the evening meal that extra special with a romantic candlelit dinner on one of the oldest Ferris wheels in the world. You can reach dizzying heights here, dining on a three-course meal complete with wine in your very own private cabin for 90 minutes.

Croatia is making its mark in Europe as one of the top spots for romance-seeking couples. And it’s Dubrovnik you need to be heading to first, as it has been dubbed the ‘Pearl of the Adriatic’.

Picture winding streets, medieval architecture and orange sunsets over a glistening sea. To get one of the best vantage points, take a cable car to the top of Mount Srđ which rises to 1,352ft as part of the Dinaric Alps mountain range.

Witness the sun going down, and watch the sky being illuminated with a burst of red, pink and purple hues before it takes its final dip. Seriously, is there anything more romantic than watching the sunset with a lover?

And don't forget to capture the moment for that all important Instagram post. If you crave alone time, escape the crowds by taking yourself and your beau on a private boat trip to the Elaphiti Islands for a truly tranquil experience.

We could hardly leave Venice off the romantic cities list, not least because of the opportunity of a gondola ride along the canals and waterways.

You can choose to see Venice through the eyes of one of the world’s most famous lotharios, Casanova, by heading to the Rialto Bridge, where he met his lovers. The best time to head to this majestic bridge is at sunset in time to catch the Grand Canal light up.

This medieval trading town on the waterways makes for an ideal place to get lost in the labyrinth of alleyways and footbridges. And there’s plenty of cool piazzas where you can grab a bite to eat or indulge in a spritzer or two to freshen up. If you want to leave the crowds behind, go and explore some of Venice’s islands which have less people venturing onto them offer plenty of privacy.

This vivacious and unpretentious city will keep love birds entertained for an entire weekend.

The city's laid-back approach when it comes to meal times means you can linger over a glass of vermouth at a pavement café in Plaza de la Paja, before spending a decadent afternoon on a tapas crawl sharing dishes of sizzling prawns and patatas bravas.

To burn off the calories, take a stroll around Retiro Park, which spans nearly 350 acres and is the city’s largest green space. Those preferring to be closer to the water can rent a rowboat for a romantic sail at Estanque del Retiro, a man-made lake on the fringe of the park.

For a perfect end to the day, factor in an evening visiting the Royal Palace to Las Vistillas and watch the moon come up over the Guadarrama mountains.