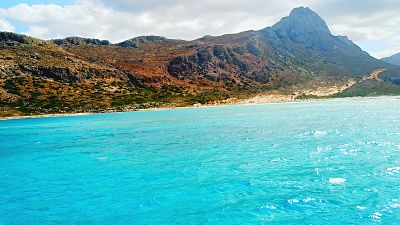 To the traveller, it's Crete: the island of mysterious Minoan ruins at Knossos and many a delicious beach resort. But for the Greeks, it's Megalonisos— the Big Island—and they aren't fooling.

The biggest island in Greece and fifth-largest island in the Mediterranean, Crete is nearly 260 km end to end. It's much more than just a spot to grab a tan, and its mosaic of civilisations makes it a cultural contender almost without peer in the region.

Crete's rugged and relatively isolated landmass is deeply chiseled with canyons and caverns, making the island an ideal, if somewhat unconventional, choice for invigorating mountain treks and canyoning - an activity that involves descending into gorges by means of waterfall rappelling and other intense techniques. In fact, of Crete's approximately 400 canyons, 90 can be considered "technical" canyons, requiring some hardcore mountaineering skills to explore properly.

Geologically speaking, the island is more about stunning mountains and ravines than wide open spaces (though there are some of those, such as the agriculturally rich Lassithi plateau), with three primary ranges: the Dikti range in Lassithi, the Psiloritis or Ida range in the middle of the island and the White Mountains, or Lefka Ori, south of Chania.

At 2,456 metres, Mount Ida wins the title of highest mountain on Crete, while in their southern reaches the White Mountains are home to Instagram champion Samaria Gorge, which at 16 km from its start on the Omalos plateau, elevation 1,200 meters, to finish at seaside Agia Roumeli, is the longest gorge in Europe and part of a protected biosphere.

The popularity of the gorge’s walking path, flanked by vertical walls reaching 500 meters, does nothing to diminish the setting’s remote and wild appeal. There are many less famous - but no less beautiful - "hiking canyons" all over Crete, such as the Sfakiano Gorge, several in the region of Chania, and south of Rethymon the famous Kourtaliotiko Gorge through which the river Megalos flows, ending at Preveli beach and its enchanting palm grove.

"Growing up in Crete we sort of took the mountain scenery for granted," says Kostas Filippakis, an art director now based in Athens, "but it's true that, other than the sea of course, the mountains and canyons really are the defining features of the island's landscape.

“I grew up around the Dikti mountains in the Lassithi area which are beautiful and with some of the best canyons around, but you could say that everyone has their 'favourite' mountain summit or ravine—and they're all right!"

If you're really serious about organising a mountain trek or rock climbing excursion, the well-established Mountaineering Club of Heraklion, founded in 1932 and pausing for operation only during the years of Nazi occupation, is a great place to start.

And to Filippakis's point, there are plenty of wild places on the island that defy easy categorisation—but that just ramps up the 'wow' factor. Cases in point, Mount Kedros near Spili, the "mountain of the 100 springs," or the intriguing Mountain Desert of the Lefka Ori where erosion of the limestone peaks, more than thirty of which are 2000 meters tall or higher, has created a stark landscape found nowhere else in the northern hemisphere.

By contrast, the Asterousia range hugs the southernmost reaches of Crete: these peaks are not as tall, but there are plenty of waterfalls to be found there in winter. Even under the sunshine of Europe's most southerly skies, the craggy landscape is always tantalisingly spooky. By the way, while most of the non-human inhabitants of Crete are mild-mannered—the island famously has no poisonous snakes, a fact hikers tend to appreciate—it's worth noting oddities like the spined mouse (think porcupine, but smaller) plus five carnivorous species including felis slyvestris cretensis, the legendary wild cat of Crete. And don't let anyone tell you they're extinct! Between those farouche moggies and the kokkalas, or bearded vultures, that may explain why Crete has only two known species of rabbit.

To hop around Crete, and not just hoofing it from one beach to another, but to journey from one scenic thriller of a stretch to the next, remember the island is a beast size-wise so a car is absolutely essential (as with your choices of eats, which are roundly delicious in Crete, go local). But you can never really crack the whip in Crete, hence part of the allure. Consider the incomparably named Gorge of Ha, part of the mountain massif of Thrypti.

Whether you view Ha's remarkable cleft entrance the first or thousandth time, you'll understand why Greek myths point to Crete as the birthplace of the burliest of all the gods, Zeus, because it looks like after creating the perfect mountain he hammered his fist right down its midsection—maybe just for the divine fun of it. In reality of course, it was tectonic activity that created the kilometre-long gorge (as for the name Ha, it comes from chasko, meaning "to form a gap" in Greek), waterfalls plunging into hidden pools from heights of up to 240 metres included.

So you might even say the place isn't made for mere mortals—unless they have the proper training, that is. Yiannis Bromirakis, a seasoned guide with the Cretan Canyoning Association, emphasizes the importance of skills and stamina to take on the technical canyons like Ha. From the guide's point of view, as he puts it, "if you make one mistake, maybe it's your last mistake." Which is probably why regardless of how old or young you are choosing your canyon quarry, so to speak, should be done with care. "We interview potential participants first in order to evaluate their level of mountain experience," Bromirakis says, and given the toughness that underscores so much of Crete's raw beauty, that's actually a good thing. Consider that Ha's opening is just three meters wide and beyond it narrows to just 30 centimetres in places, with the massive walls on either side soaring to heights of nearly 400 meters. Stunning for sure, and affording the very bold the chance to do wild stuff like this, but there are some inherent hazards: as Bromirakis notes, "even goats that wander into the gorge rarely find the way out on their own." Which means he and his team have actually helped steer wayward goats back outside so they can nibble on Cretan herbs at whim. The company's website rates various canyons by level of difficulty.

Part of what gives Crete its wild appeal, as hopefully you're beginning to see, is its power to surprise and this really does happen almost as soon as you haul yourself away from the beach. According to Incrediblecrete.gr, the island has "almost as many species and subspecies of plants (about 1750) as the whole of Britain (1450), even if it is 35 times smaller, and 9% of the plant species of Crete do not exist anywhere else in the world."

Again, they aren't lying: one spring while motoring out to the ancient Minoan palace ruins of Phaistos south of Heraklion I was so spellbound by the sight of fluttering red and purple wildflowers outside the window that I had to pull over and pick a few for myself. My little exercise in mercenary roadside horticulture made me late yet again, this time for lunch at Irini Mare, a resort on the south coast surrounded by dulcet nature, but the improvised bouquet I presented to my bemused pal ("they're just weeds!" he cackled) was to my mind more arresting than anything you'd find at a high street florist's.

Crete has always welcomed all chasers of waterfalls and lonely mountain vistas, you just need to take the time to go out and appreciate them. Sometimes all it takes is stopping the car, taking a few deep breaths and maybe a picture or two to keep that Instagram percolating—but with so many organised hiking trails there really are limitless opportunities to explore the Cretan hinterlands in greater depth, according to your fitness and skill level.

The Gorge of Arvi, a technical canyon noted for its underground river might tempt you as could a hike through the Gorge of the Dead in Zakros—named for the Minoan tombs found in caves there and not a technical canyon, hence relatively more accessible. Or perhaps something wild but slightly more sybaritic beckons, like the palm forest of Vai on the eastern Cretan shore—with 5,000 date palms, it's the biggest palm grove in Europe.

Crete may be classic Greece, but now as ever it's also very much a place to choose your own adventure.

Based in Athens, Anthony Grant also writes the Greek Column.

Mythical grottos: The most famous caves in Greece