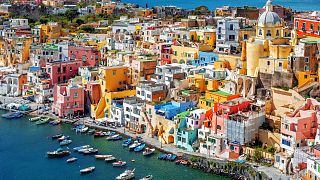 Procida, a tiny island in the Bay of Naples, was put on the map last year when it was awarded Italy’s Capital of Culture for 2022.

This colourful destination is the first island to be given the title since the award was established eight years ago. It follows in the footsteps of cities like Perugia, Palermo, and Parma - last year’s Italian Capital of Culture.

Recipient cities (or, in this instance, islands) become a focus for improved cultural heritage and touristic development, with numerous projects and initiatives run to benefit the region.

Now a quarter of the way through its tenure, Procida has numerous cultural projects on the go that are inspiring residents and tourists alike. Next month, a ‘paper fleet’ event will see thousands of little origami boats made by local children cross the bay, drawing awareness to the fragility of the environment.

44 cultural projects are planned in total, along with 330 days of programming, involving 240 artists and eight regenerated cultural spaces - such as an old sixteenth century palace turned prison.

“Procida can be considered a metaphor of many places, many administrations, many communities who have rediscovered the enthusiasm and pride for their territory,” the island’s mayor, Raimondo Ambrosino, said last year.

During the application process for the title, Procida presented a vision entitled "la cultura non isola" - which translates to "culture doesn't isolate." This concept was a significant part in being awarded the Capital of Culture position, with particular resonance in our current times.

The vision "is capable of conveying a poetic message, a vision of culture that reaches out from the tiny reality of an island as a well-wish for all of us, for the country, in the months to come," said the Capital of Culture Commission in a statement.

Why was Procida chosen?

The smallest island in the Bay of Naples, often overshadowed by its neighbours - Capri and Ischia - Procida may seem a surprising choice for such a major title.

But, despite being the least-visited of the three islands, Procida is exceptionally beautiful with an authentic feel. The island only has 10,000 or so inhabitants, but with a total area of just 4 sq. km - it feels lively, without being cramped.

One of the key reasons Procida was picked was the island’s wealth of traditional artistry, with artisan workshops aplenty (especially in Marina Grande).

Procida also has its own unique history too, with Ancient Greek artefacts from the 16th century BCE found across the island. Some 3,000 years later, Charles III of Spain turned Procida into his personal game reserve, before it became a major outpost for the shipbuilding industry.

As a result, the island has some extraordinary architecture, with the beautiful, multi-coloured buildings capturing these different periods of history. Visitors today can go diving off the coast in search of impressive, underwater archaeological sites.

It’s no wonder then, that Procida has both been featured in and inspired many major works of art. Elsa Morante’s 1957 novel Arturo’s Island is set on Procida, and the island plays a major role in Alphonse de Lamartine’s legendary novel Graziella.

For film fans, you might recognise Procida from the Elizabeth Taylor/Richard Burton version of Cleopatra in 1963, where the island’s church dome can be seen in the scene where Cleopatra’s barge enters the harbour. More recently, the island has appeared in The Postman and The Talented Mr Ripley too.

Plus, there's something for nature lovers too. It's possible to whale watch off the island, and one of the Mediterranean's most important dolphin colonies live in the waters surrounding Procida.

What else is planned for Procida’s Capital of Culture year?

The best is still to come, according to the thought-provoking programme outlined by Visit Procida.

In May, the monumental Palazzo d’Avalos - one of the eight places afforded a re-do - will host ‘SprigionARTI’, a contemporary art exhibition with site-specific works from celebrated Italian artists, running until December 2022.

If archaeology is more your bag, an exhibition entitled ‘The Greeks before the Greeks’ follows from June - September; a joint initiative between the National Archaeological Museum of Naples, the Archaeological Park of Campi Flegrei and the Civic Museum of Procida.

A number of the projects take an interactive approach. ‘Happening of Human Books’ will involve a director overseeing 180 citizens as they each interpret a page from ‘The Immortal’ by Argentine author Jorge Luis Borges. This will be acted out in 22 “symbolic places” across the island.

You can find out more about what’s on here.

Where is Italy's next Capital of Culture?

After Procida’s turn in the spotlight next year, the baton is going to be passed over jointly to Bergamo and Brescia, both cities that have been heavily impacted by the Covid-19 pandemic.

Parma, in northern Italy, was the previous Capital of Culture - a title the city held for two years. Usually the position is for only a year, but it was decided to extend Parma’s tenure in the wake of the coronavirus crisis.