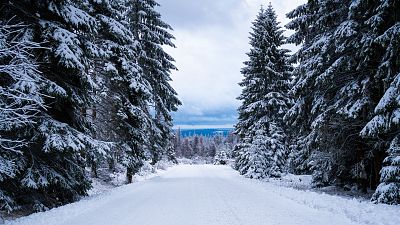 It’s not often that a three-hour drive from a capital city will take you back in time. Yet that’s exactly what my trip to the Harz Mountains in Germany did.

From the moment I entered Wernigerode, a tiny town at the foot of a mountain, I rarely saw anything that looked like it had been around for less than 100 years.

As the sun rose, heavy white clouds masked the mountains from view and the town’s medieval-style buildings were topped with snowy hats. In the Harz Mountains, regular snow from December through to February is nothing new, but my English eyes weren’t used to snow lasting more than a day.

I began to crunch my way through the streets of wooden houses and brightly-painted fences to get to the train station, my first stop for the day.

The Brocken Railway was the reason I had come to this town lost in time. Two restored steam trains that look like something from a Harry Potter book wind their way across three railway tracks, crisscrossing through the mountains. The higher you go, the more spectacular the landscape becomes.

At the base of the mountain, Wernigerode was bustling with life. The town square was surrounded by market stalls selling handmade food and drink. The train station stood in pride of place, with gas-powered lamp-posts standing at the end of each platform.

With just two trains running on these lines, it didn’t take me long to find my platform. The red and black train was smaller than I expected, but it would manage to huff and puff all the way up to the top of the mountain. These railways are used to reaching all but the last sixteen feet of Brocken’s summit, the highest mountain in the Harz range, at 3743 feet above sea level.

The train itself was anything but luxurious. Hard wooden benches lined the walls, left deliberately reminiscent of their vintage history. I soon learnt that the railways snaking through the Harz Mountains have stood since 1898.

Like many places in Central Germany, their past is broken up with the unrest that plagued the country throughout the 20th Century. World War Two left the railways damaged and unusable, repaired only to be used as a Cold War military base. Back then, the trains carried supplies and soldiers through the mountains, rather than fleece-wearing tourists.

Today, tickets are sold according to capacity, not by seats, so those last to arrive had to stand, even spilling out onto the precarious metal walkways that joined the train carriages.

Still, with 360-degree views of pine and fur forests and sooty steam billowing overhead, standing outside is well worth the ice-cold wind. The higher the train climbed, the thicker the snow became, until it stacked up at the side of the tracks, almost as high as the train itself.

I refused to go back inside to the warmth of the train, standing outside with only my eyes exposed to the air, blinking away the smoke that streamed down the side of the train.

When it seemed impossible that this much snow could exist in one place and the trees began to bend under the weight on their branches, we finally reached our destination. Through low-hanging icicles and a flurry of snowfall, I could just about read a red and yellow sign that told me we had officially reached the top of Brocken.

What I thought were white-washed concrete walls were actually densely-packed blocks of ice, guiding visitors away from the station. Icicles bigger than my entire body hung from the buildings and it was hard to tell what each one used to be.

It’s easy to lose your sense of direction when your world has suddenly shrunk to four square metres. With snow stretching on for eternity and every building looking the same, it took me a few tries before I found Brockenhaus, the visitor’s centre that also serves as a cafe.

I had to go through two sets of doors to get into the building, so as to protect the main room from the cold and the wind. Once finally inside, I saw rows of benches with German flags from every state lining the enormous room.

The sudden roar of voices and the smell of smoke and bread smacked me over the head. After exploring what felt like miles of snowy mountaintop, food and hot chocolate were high on my priority list.

Just as with everything else at Brocken, the cooking was from another era. Pretzels and hot drinks were made from log-burning stoves and German waitresses in traditional dirndls walked between the tables - albeit with more fur on their clothing than their southern cousins.

When I finally emerged back out onto the mountain, the white of the snow made me blink and lose my bearings all over again. I walked as far as I dared into the white expanse that surrounded me, until I could no longer see any buildings.

I could have been standing on the edge of the mountain for all I knew, or 200 feet from the edge. With the seemingly permanent snowstorm only picking up speed as time went on, there was no way of telling.

When it finally became time to board the train back through the dense pine and fir forests, the cold had sunk deep enough into my bones that I ventured inside for a seat by the window. The foggy window offered glimpses of a sunset poking through the trees as we crawled lower and lower. The banks of snow grew smaller, until you could finally see the base of the trees once more.

Getting off the train felt like waking up from a dream. The monochrome summit seemed otherworldly and distant now the wind was gone and colour had returned to the world. Nonetheless, it was another world I was glad I had visited.