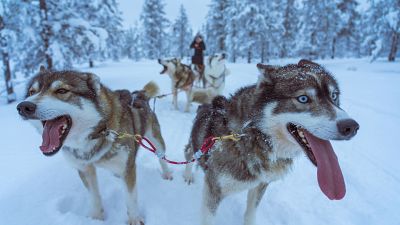 On a winter trip to Finnish Lapland with Cookson Adventures and Luxury Action, I had the opportunity to spend some time with the local Sámi people – the only Indigenous community in the European Union.

In the depths of a snowy pine forest I saw the way they herded reindeer into a corral to count them, and at night, listened to a gravel-voiced shaman tell folklore stories around a campfire while he was dressed in animal skins and a necklace of bones.

I was also invited into a local family’s home for tea and homemade cake, shown how they make handicrafts out of antlers and served reindeer soup in a forest kota (hut).

It’s experiences like these that make travel truly memorable and significant – it’s an amazing privilege to see first-hand how other people live, to be welcomed not as a tourist but a fellow human being into their world and be part of it rather than an observer.

Of course, these kinds of encounters have to be handled with more care during the viral age (I took a COVID test before departing London, there were no hugs or handshakes and masks had to be worn indoors) but they are still possible.

In fact, as the travel industry rebuilds, making sure local communities benefit from tourism will be vital.

For companies like family-run HuskyPoint in Rovaniemi, the many months of border closures have been devastating for a business that relies on making money from dog sled rides. With more than 100 huskies and fluffy Alaskan Malamutes to care for, it’s no wonder that the owner jokes that she will give me her bank account details.

Up here, in the Arctic Circle, there aren’t that many ways to earn a living and for most, you can’t just retrain and turn your hand to something new. Until the tourists return, work entails keeping the dogs fed and exercised, which is no mean feat as they can run up to 200km a day.

In the case of the Sámi people, who are traditionally nomadic and now number just 10,000 in Finland, their culture, customs and language need to be preserved and protected.

“What are these things that people have in their hands, nowadays?” the shaman asks, poking at his hand with a finger.

“I only have two jobs now – telling stories and making magic.”

In the past, I am told, the Sámi people used squirrel skins as currency. Now, it is sleigh rides to meet Father Christmas that help generate a living for an ancient community of people, who certainly excel in creating a sense of wonder in this snowy wilderness.

Why are agricultural escapes so popular among urban dwellers?