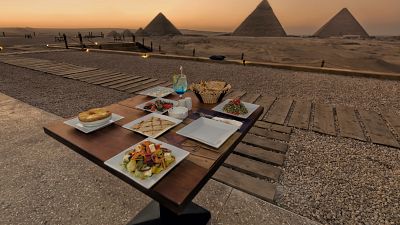 The Great Pyramids of Giza are one of the most recognisable tourist attractions in the world. The ancient Egyptian pharaohs built them to last forever and now, 4,500 years later, they’re getting a revamp.

With the goal of making the country’s most popular heritage site more accessible to tourists, a 17 million euro renovation is underway. The refurbishment is centred on the Giza Plateau, which houses the Sphinx and three pyramids, including the oldest and tallest masonry structure, the Great Pyramid of Khufu.

The ambitious project includes a new visitor centre, an environmentally-friendly electric bus and the first restaurant ever to be located on site.

The Pyramid Plateau gets its first-ever restaurant

Tourists exploring Egypt’s Giza Pyramids can now enjoy a great meal afterwards, with the opening of the first-ever restaurant on Pyramid Plateau.

The 9 Pyramid Lounge, which opened in late October, is designed to mimic a traditional Bedouin camp in the desert. At 1,341 square meters, the complex has plenty of options for diners - who can choose between eating al fresco on the Bedouin-style cushions scattered about the place, or under the canopy where chairs and tables are available.

The complex was built with all natural materials to blend in with its surroundings and to demonstrate the project’s commitment to sustainable tourism in the area. In addition to the restaurant, a fleet of electric busses and golf-carts have been trialed with the aim of these becoming the only modes of transport on the site.

The restaurant was financed by Mr Naguib Sawiris, Chairman and CEO of Orascom Investment Holding, in partnership with the Supreme Council of Antiquities in Egypt. Mr Sawiris is Euronews' majority shareholder.

He explained the thinking behind the new venture: “Our main objective was to upgrade the services provided to the visitors to be able to level up to the greatness of Egyptian civilisation and the magnificence of this historical site, while preserving this area from all forms of pollution, and creating a fascinating experience for its visitors.”

Sawiris added: “The breathtaking view of 9 Pyramids is one of a kind in the whole world. This is in addition to two fine dining restaurants and a café to be launched in early 2021 in the old engineering administration building on the Northwestern side - which has been completely modernised and redesigned to serve as a restaurant complex.”

9 Pyramid Lounge is one of a number of projects designed to boost tourism in and around Egypt’s capital, Cairo.

Tourism accounts for more than 12 per cent of Egypt’s gross domestic product (GDP), according to government statistics. The new facilities at the Giza plateau are part of a wider effort to develop key tourist sites in the country. The Grand Egyptian Museum, which will become the world's largest archaeological museum, is set to open next year.

Dr Khaled El-Enany, the Minister of Tourism and Antiquities, said at the unveiling of 9 Pyramids Lounge that Egypt is keen to transform the tourism map of Cairo.

For years, locals selling souvenirs and camel rides have been part of the experience when visiting the famed site. But now the sole remaining wonder of the ancient world can be viewed in a calmer setting as a new souk regulated by permit holders will be launched at the start of next year.

The plan to renovate the ancient site has been in motion for the past 15 years, but the project was put on hold in 2011, after the revolution that ousted long-time ruler Hosni Mubarak.

The years of political unrest that followed and a deadly terrorist attack on a Russian passenger plane in 2015 saw the country’s tourism industry a heavy hit . But lately, the industry has begun to bounce back. Last year, 13.6 million people visited Egypt and before Covid-19 struck, 2020 was expected to exceed 15 million.