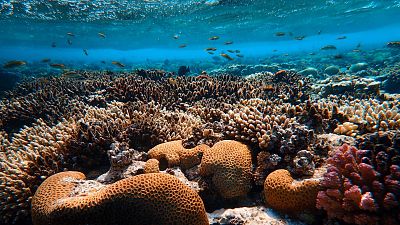 Off the coast of Egypt, the waters of the Red Sea are home to some of the most productive and diverse coral reefs in the world.

Year-round sunshine attracts millions of snorkelers, divers, and other visitors to the coastal resorts. The Red Sea region is particularly popular as tourists can obtain a “Sinai Stamp”, a free alternative to a tourist visa, which makes a weekend trip from Europe easy to arrange. As a result, the tourism industry is one of the country’s leading economic sectors, generating around 389 billion Egyptian pounds (€20.9 billion) for the nation’s economy in 2018.

But the high concentrations of tourists in cities along the Red Sea contribute significantly to plastic pollution, which threatens the region’s marine life.

Plastic pollution is destroying our oceans

As many as thirteen million metric tons of plastic are dumped into oceans around the world each year, according to research from Pew Charitable Trusts. When plastic gets into the sea, it endangers fish, seabirds, sea turtles, and marine mammals, which can become entangled in or ingest debris and then suffocate, starve, or drown. Plastic rubbish also damages coral reefs, as the bacteria that causes white band disease, which destroys coral tissue, can colonise and spread via plastics.

When plastic debris settles on coral, it also creates the perfect conditions for another lethal infection called black band disease. In the Red Sea, plastic pollution threatens more than a thousand species of colourful fish and coral, about ten per cent of which are endemic to the Red Sea, meaning they are not found anywhere else in the world.

The team turned their research into a proposal for a ban on the production and use of single-use plastics in the Red Sea Governorate in spring 2019, and governor General Ahmed Abdullah, put the proposal into law in April. It went into effect the following June.

Is banning single-use plastic that simple?

In the Red Sea region, Governor Abdullah supported HEPCA’s proposal, which made the legal aspect of the plastic ban relatively simple, explains El-Ramly. However, implementing it has proven more difficult.

“People resisted it,” says El-Ramly, “[they] were used to using plastic…in shops and at home.” Disposable items like bottles, cutlery, food containers and coffee cups are valued for their convenience in Egypt, and many seaside snacks and even juices are regularly served in small plastic bags.

With the ban in place, HEPCA launched a public awareness campaign to educate the public about the harmful effects of plastic pollution on both marine life and human health, and to encourage a move toward more sustainable alternatives. The campaign targeted restaurants, hotels, resorts, and other tourist hotspots. Last summer, HEPCA also began to offer certifications to businesses that eliminate single-use plastics. The Siva Grand Beach Hotel in Hurghada was the first to be granted the certification for its commitment to zero plastic tourism.

While several resorts are beginning to embrace the principles of sustainable tourism in the Red Sea region, supermarkets and restaurants have been a major obstacle to the implementation of the single-use ban because of their reliance on plastic bags.

Egyptians use an estimated twelve billion unrecyclable plastic bags every year, so both shopkeepers and consumers have been hesitant to phase them out. “Plastic bags are cheap for shops,” El-Ramly explains, and despite HEPCA’s public awareness campaign, “it was difficult to convince them to switch.”

Now, more than a year later, many businesses and consumers have given up single-use plastics, but others still fail to comply with the ban. Those that do not comply are subject to fines, but El-Ramly says that when staff at HEPCA hear about violations, they prefer to take a more community-oriented approach to enforcement. “Whenever we find someone not complying, we talk to them,” El-Ramly says, “and we will not stop until we get the results we want.”

Thanks to the work of HEPCA and other conservationists, the Red Sea Governorate is leading the way toward sustainable, zero plastic tourism in Egypt. Several cities in South Sinai, including Sharm El-Sheik and Dahab, which is home to the notorious Blue Hole dive site, have since followed suit. El-Ramly describes the bans as a step in the right direction, but says that the conservation work never stops.

“I hope [a single-use plastic ban] will be implemented across the whole country one day,” she says.

A nationwide ban on single-use plastics is not likely to become law in Egypt anytime soon. If it did, though, it would go a long way toward protecting the Red Sea and Egypt’s other incredible natural wonders like Mount Catherine, the nation’s tallest peak, and Siwa’s salt lakes in Egypt’s western desert.