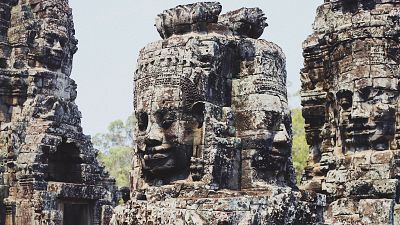 Siem Reap in Cambodia is one of the most dangerous places to be a gardener. The task involves scaling the walls of the enormous Angkor Wat Temples to save them from being swallowed up by the surrounding jungle.

These temples have survived hundreds of years of weathering, civil war and now, thousands of tourists visiting the complex each year. Dating back to the 12th Century, the seventh wonder of the world has truly stood the test of time.

Spanning across 208 hectares (500 acres) of jungle floor, parts of this intricate temple complex have even featured in the film ‘Lara Croft Tomb Raider’.

But none of this compares to the damage tree roots could do if they’re given the chance to anchor down into the brickwork. That’s where Chhoeurm Try and his team come in.

Armed with only some ladders and a hard hat, these men risk their lives to scramble across the 900 year-old brickwork and remove any new signs of growth. No climbing gear is allowed, as it could damage the temples.

“If we make a mistake, we will not survive,” says Try. But the team takes this in their stride in order to protect their heritage.

Egypt’s Giza Pyramids are getting a revamp to boost tourism

Plans are underway to build a road beneath this prehistoric monument

Have you visited these ancient cliffside tombs in Turkey yet?