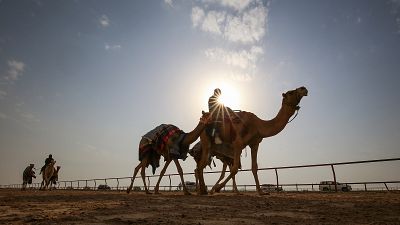 More than 500 camels compete in a two-kilometer race across the vast sands of Egypt’s Sinai desert.

Their owners blast horns and cheer them on as they ride alongside the track in SUVs.

The race lasts about ten minutes and is a training event for an international race taking place in October in Sharm el-Sheikh.

Camel racing is a popular and lucrative sport in many Arab countries.

To the Bedouins of the South Sinai desert, the race was a thing of the past after the invention of cars, but revived recently a way of keeping a traditional heritage alive.

"Camels will not disappear for us. We can use them for centuries. If the camel goes away, the Bedouins will also go away," Sheikh of the Alegat tribe, Hassan Sallam told AFP.

Camels are placed in different categories according to age and sex. On their backs are mechanical jockeys wearing racing jerseys and brandishing whips, which are lighter than human riders.

In a different race, young boys mount the camels to complete a 10-kilometre course.

But camel races are a costly passion:

There is no prize money for the race, but the winners carry off a prestigious trophy which also helps boost their animal's value.

"In such races, when the camel ranks high, the owner can sell the camel and its price increases from 20 or 30 thousand pounds to 500 thousand pounds or one million Egyptian pounds (55 thousand euro), and this is a source of income for the city."

The races attract large audiences to the middle of the desert and after a six-month break due to coronavirus, hundreds of Bedouins are even more excited to race their camels again.

Six unusual European festivals to add to your bucket list