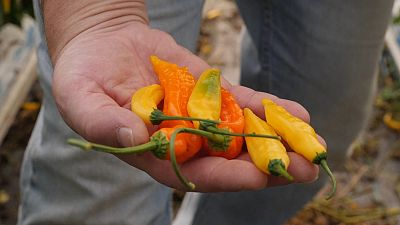 Sliced and ready to serve: some of the world's hottest chillies are grown at a farm in Bedford in the UK.

Several of these fiery fruits are at the very top of the Scoville chart, which measures the heat of a chilli pepper. And on a warm autumn day, chilli fans visit Edible Ornamentals to turn the heat up even higher.

Sweat pours from the brow and glasses of milk are liberally chugged to soothe the burning tongues.

Susan Smith has arrived with her husband to experience the chillies. She bravely tries a chocolate habanero.

Jon Doody is a chilli connoisseur and a regular on the chilli festival circuit, he takes a bite of a Carolina Reaper with an average Scoville rating of 1.62 million Scoville Heat Units (making it currently the hottest chilli in the world).

"I'm feeling quite numb actually the endorphin rush that I'm getting at the moment is why we eat hot chillies to get that rush, but it's really, really hot and it's building. You may see that I'm sweating profusely," he says.

The man who grows these chillies is Shawn Plumb, who's originally from Idaho in the USA.

He carefully selects the best chillies from the thousands of chilli plants he grows from seed every year on his farm.

Many of the tourists want to try the hottest chillies, but he is trying to show there's more to them than just heat and he wants them to explore the range of flavours between the many niche varieties.

He says: "I don't necessarily want to encourage them to cause themselves pain or anything, but I want them to understand and appreciate that they all have different flavours. People are interested, but they want to go away and say I've tried the hottest chilli on the planet."

Mayur Shah grew up in Kenya and fell in love with chillies at an early age where they were a staple in the Indian cuisine of his youth. Now he is trying to grow his own and has come along with his brother to pick up some tips.

"Basically we just love chillies in our cooking, most of our cooking will always have some kind of a chilli in it," he says.

Chilli production might be better associated with hotter climates like Mexico or India but the British summer, with its long daylight hours (and a little bit of help from a greenhouse), actually produces a very good crop.

Shawn Plumb explains "They're easier to grow than tomatoes. The key thing is the light levels in the UK, the length of the day is why we do so well with chillies, we have nearly 17 hours of daylight in the peak of the summer solstice so if you start them early you can get a big plant with loads of chillies by this time of the season."

Edible Ornamentals was the first pick your own chilli farm in the UK, but for now, picking has been temporarily suspended.

Another key area of the business are the chilli tasting tours and workshop experiences.

The tour involves visits to various greenhouses and polytunnels to see the chillies growing, with plenty of explanations about the different varieties and how they can best be grown.

The chilli tasting tours run from May to November each year to coincide with the growing season.

Have you tried this UNESCO recognised food and drink?

Are red, yellow and green peppers all actually the same vegetable?

Ukrainians in Zelenskyy's city describe him as 'symbol' of country