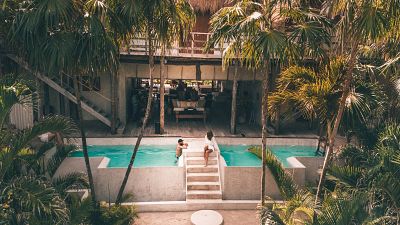 Eco-friendly hotel chain Habitas has come up with a concept to build 3D printed, flat-pack hotels. The group has just announced a global expansion, but critics say it might not be as sustainable as it appears on the surface.

From 2020, Habitas will build between ten and twelve more hotels in Asia, the Middle East and Africa, having raised around €18.5 million euros to do so. Investors include Uber’s founder Travis Kalanick and Chief Executive of Ocado, Tim Steiner. The lightweight, flat-pack approach will cut building costs and intends to contribute to the hotel group’s green credentials, as local carpenters and sustainable materials will be used.

The first hotel in Tulum, Mexico, is already up and running and described as a ‘sustainable sanctuary’ on its website, boasting natural palapa roofs and canvas walls. “We are focusing more on the people, the community, the experiences — a little bit like Club Med for our generation,” Ripley told the Financial Times (FT).

What is 3D printing?

3D printing is starting to break into the mainstream manufacturing world. In technical terms, it’s dubbed the ‘additive manufacturing market’ and is estimated to be worth just under €13 billion euros in 2020. The reason it is described as ‘additive’ is down to the nature of the manufacturing. A three dimensional object is made by incrementally adding more and more material until the object is complete. Whereas, ‘subtractive’ techniques like carving or milling involve removing parts from a piece of raw material in order to shape it.

In the field of construction, 3D printing can be used to fabricate buildings from scratch. This is often a faster process, involving lower costs of labour and producing less waste due to accuracy.

Dr Martin Baumers is the Assistant Professor of Additive Manufacturing Management at Nottingham University. He tells Euronews Living, 3D printing “enables new designs for buildings” which “produce energy savings over the life of the structure.” What’s more, if using “benign raw materials”, this can mean the process generates a smaller environmental footprint, with additional ecological benefits “if the raw material is sourced locally.”

What about the environmental cost of transporting the flat-pack parts?

Habitas builds its hotel rooms in Mexico, but as the 3D-printing technology is based there, “it flat-packs the basic structures of its rooms and ships them” to other hotel locations, reports the FT. “We assemble them like Lego,” says the co-founder.

According to travel and tourism expert at GlobalData, Ralph Hollister, this is where the plan falls down. In other words, the environmental cost of long-haul transportation may outweigh the sustainable benefits of 3D printing in the first place. If the 3D printing base remains in Tulum, “the export of hotel parts to destinations from Mexico” will create “an increase in CO2 emissions,” he says. “This would not be necessary if the hotel was being built on site.”

Criticising the hotel’s ethos, Hollister concludes that Habitas’ “core belief” of sustainability seems to have been “conveniently forgotten as it expands further.” Habitas hotel group declined to comment when contacted directly.

Dr Martin Baumers agrees. Whilst maintaining 3D printing “may be seen as a green method of construction”, he also points to the issue of air travel.

“My feeling would be that long distance air travel to and from the hotels would dwarf any energy consumption associated with the buildings over their lifecycle,” he told Euronews Living.

Given that 3D printing has now been “recognised as an efficient and sustainable technology in the fields of advanced manufacturing”, Hollister welcomes its usage in construction. However, “setting up regional printing facilities would make the business model more sustainable and it’s something they should consider if they have not already”, he concludes.