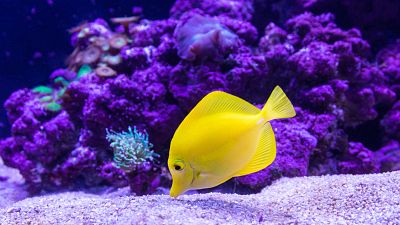 Experts estimate that half of the corals that existed in the early 20th century have died. Coral reefs support not only 25 percent of marine life but shelter shorelines from storms and erosion, provide food and jobs for millions of people and are used in the treatment of diseases such as certain cancers and HIV.

The carbon dioxide that humans release into the atmosphere raises the temperature and the acidity of seawater, which can both poison corals and hamper their growth.

Marine biologists are working on different restoration projects, such as the one [saving the Great Barrier Reef](the http://www.livingit.euronews.com/2018/11/08/saving-the-great-barrier-reef). Recently scientists in Israel have discovered another glimmer of hope; the corals of the northern Red Sea may survive, and even thrive, into the next century. Meanwhile, in the Seychelles, marine biologists are rearing corals in specially-controlled nurseries.

Click on the video above to learn more about these projects.

If you are interested in the health of our oceans, click here to watch the video reporting about British scientists from the Nekton research team preparing for a deep-sea mission that aims to unlock the secrets of the Indian Ocean.